Caption Literature
A Complete Early Prehistoric Fossil Dolphin Skull
150’000 Years Old
Size : 48 cm long – 19 ins long
The earliest representations of fossils are the animal paintings or carvings found in the Palaeolithic caves of Europe that date back to a time when some of the creatures we now know only as fossils, such as this dolphin, were still alive.
During the Pliocene period ( 5.3 - 1.75 million years ago ) the modern forms of whales and the closely related dolphins were gradually replacing the more primitive species. It is believed that the early forms of the Eocene whale like creatures who mostly inhabited shallow tropical seas may have descended from land dwelling mesonychids that took to foraging for food in shallow water. While mesonychid skulls and skeletons are strikingly similar to those of the first whales recent DNA studies suggest that they may actually be artiodactyls, even-toed hoofed mammals, more closely related to hippopotamuses. This area is still the subject of great debate. 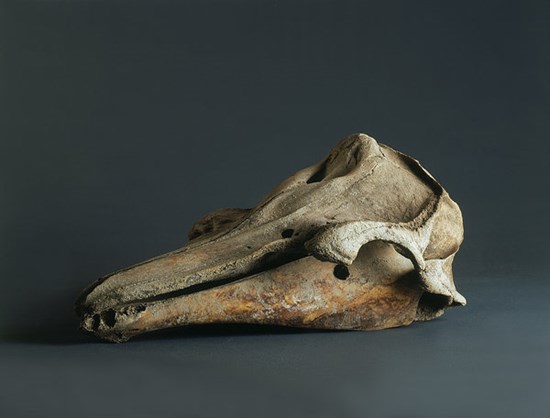