An Unusual and Amusing Parrot made of Venetian Glass Beads

Caption Literature
An Unusual and Amusing Parrot made of Venetian Glass Beads
English, Regency period
Glass beads and wire on a turned wood perch
Circa 1820
Size : 35.5 cm high – 14 ins high
Until the 20th Century Venetian glassmakers dominated the world market in beads in volume, quality and diversity. Glassmaking is recorded at Venetian monasteries in 822 A.D, but the foundation of the real glass industry was established from 1200 to 1400 A.D
In 1292 A.D all of the glass factories were relocated from Venice to the Island of Murano to protect the city from fires and to keep production and manufacturing procedures secret. By the 1300's Venetian beads were being traded by galleys to England, Flanders and the Black Sea, and by the 19th century they had become traded across the world for many different commodities.
In the British Museum in London there is an important collection of Venetian glass beads sewn onto sample cards that were used in the Africa trade. The cards are entitled 'beads traded for gold', 'beads traded for ivory', 'beads traded for palm oil', and 'beads traded in Africa for slaves'.

An Unusual and Amusing Parrot made of Venetian Glass Beads 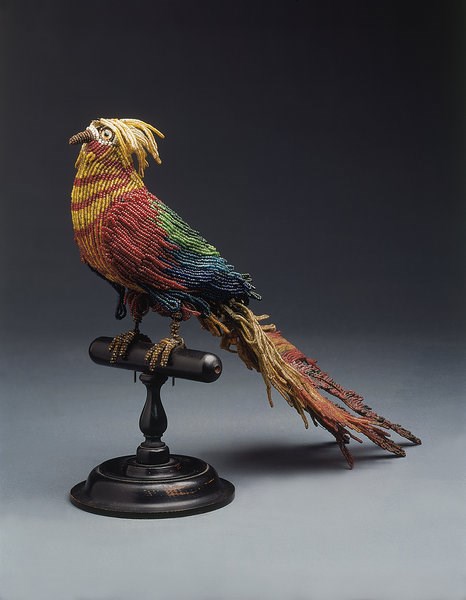