Caption Literature
An Ancient Achaemenid Persian Cylinder Seal
Of grey – green limestone depicting a hunting scene
6th Century BC
Size : 4.5 cm high, 2.5 cm dia., 1¾ ins high, 1 ins dia.
Cylinder seals originated in Mesopotamia around 3500 BC. The use of these engraved stone seals to make ownership impressions on clay is an indication of the evolution from village agriculture to urban society. Preceding writing the seals developed as a means of documenting business transactions, often being used to seal storage jars and to authenticate letters and lists of goods.
The Persian Achaemenids revived the use of the cylinder seal in the 6th and 5th centuries BC probably for reasons of prestige as they were then able to lay claim to the inheritance of the great empires of Mesopotamia and Babylonia that had preceded them.
Cylinder seals were often used at their great city of Persepolis for administrative purposes.
Artistically cylinder seals represent some of the first and finest attempts of the human race towards systematic representational art. 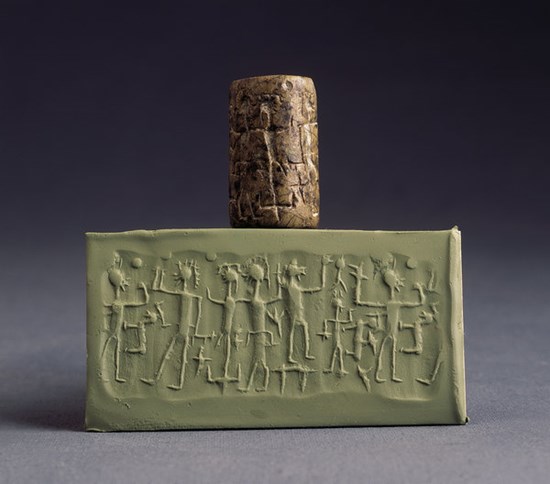