'Omai' An Engraving by James Caldwell , after William Hodges , For Captain James Cook .

Caption Literature
‘Omai’ An Engraving by James Caldwell , after William Hodges , For Captain James Cook .
1 st Proof , uncut margins , fine condition .
Circa 1777
Size : 33 cm high , 28 cm wide – 13 ins high , 11 ins wide
'Omai' or more correctly Mae was a young Tahitian man from Huahine whom Lieutenant Tobias Furneaux had brought back to England on the 'Adventure' . He was painted by Hodges sometime between August 1775 and June 1776 . The portrait was commissioned by John Hunter ( 1728 -1793 ) an eminent Scottish surgeon and anatomist who had a great interest in comparative physiognomy and a passion for exotic cultures and peoples . He was a keen collector of curiosities , creating a large cabinet of numerous rare 'National Skulls' that complemented pictures of non-europeans .
Solander's description of Omai upon his arrival in England fits both his portrait by Hodges and the particular interests of Hunter : 'He is very brown , almost a(s) brown as a mulatto . Not at all handsome , but well made . His nose is a little broadish and I believe we have to thank his wide nostrils for the visit he has paid us - for he says , that the people of his own country laughed at him upon the account of his flatish nose and dark hue â€¦.' .
Omai was adopted by Sir Joseph Banks and the Earl of Sandwich and introduced to fashionable London society , including George III and the Royal family . He caused much amusement and was greatly admired by the ladies of the court who vied with each other to sit next to him at table . Dinner parties were held in his honour and he received numerous offers from aristocratic ladies to teach him to read and write .
He was painted by several artists , most famously by Sir Joshua Reynolds whose portrait of Omai hung until recently in Castle Howard , until it was sold , and then bought for the nation in 2003 at a cost of £ 9 million . It now hangs in the National Portrait Gallery .

'Omai' An Engraving by James Caldwell , after William Hodges , For Captain James Cook . 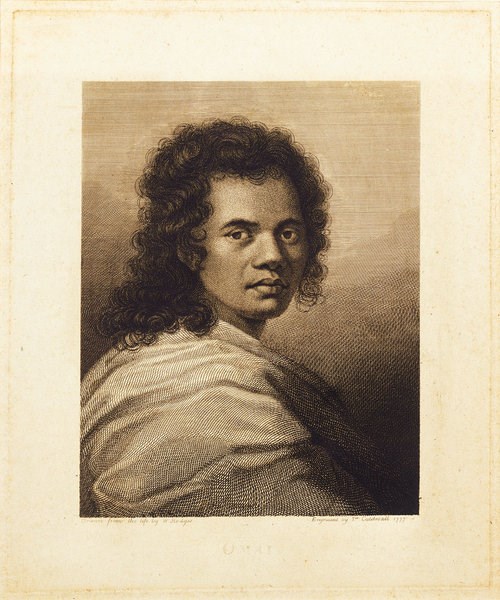