Caption Literature
Ancient Egyptian fragment of a sarcophagus panel with hierogllyphic inscription (vertical) 'may Osiris give offerings' and (horizontal) 'The Osiris, Lady of the House'
3Rd Intermediate Period, 1069 - 747 BC
Size : 30.5 cm high x 13.5 cm wide
Osiris was one of the most important Deities of Ancient Egypt, and one of the earliest Gods, whose principal association is with death, resurection and fertility.
In the beginning only royalty and the highest nobility were embalmed and for most of Egyptian history the poorest people were interred in simple graves in the hot, dry sand of the dessert and relied on the natural preservation taht this provided.
Mummification was not only a technical process that became more sophisticated with time, but also a ritualised one in which specific rituals accompanied every stage of the work.
The entire process from death to burial usually took seventy days, a period of time probably connected with the phases of the Dog Star Sirius. In the Old Kingdom the deceased was believed to return as a star and the period of mummification coincided with the time during which the star was visible. At the end of the process the deceased was renewed and one of the embalming spells concludes with the assurance 'You will live again, you will live forever. Behold you are young again for ever.' 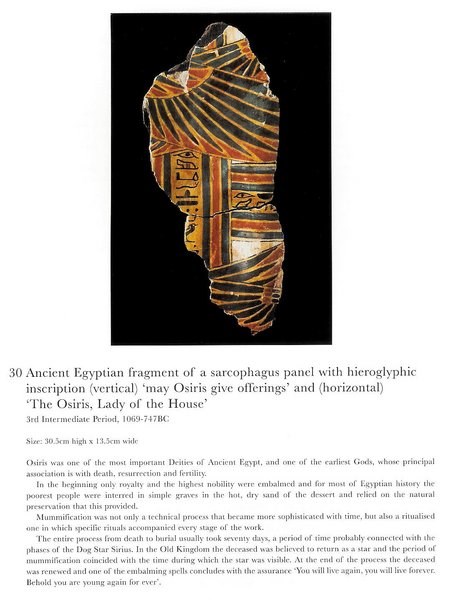