Caption Literature Exhibition
An Unsual and Finely carved ivory Indian chess piece
18th century
Size : 6cm high x 2.5 cm wide x 3.5 cm deep
Chess is unique , no other game of such complexity has established itself in so many different cultures and civilizations.
Thomas Hyde was Chief Librarian of the Bodelian Library from 1665 to 1701 and wrote a book on the history of games in which he established beyond doubt the facts implicit in older Arabic sources that chess originated in India and then travelled by way of Persia and the Arab world to Western Europe.
However right up to the end of the 19th century the arcane issues of the origins of the early game seemed to provoke intense emotions. With aggresive arguments for and against the Persians or the Indian Hindus as the true inventors of the chess game.
Even today there are claims that the historical chess of 7th century India was directly descended from a ritual or divinatory game, with a revival of the notion that all board games have a magical or religous origin.
However, chess most probably originated in Northern India as a Hindu game in imitation of warfare. It is much more probable that it is a game of military symbolism. Nearly all the Arabic legends about chess have military or political meanings. The game was regarded as a training or preparation for war and thus was defensible in the Islamic world as it was not merely recreation or for gambling.
This Kashmiri finely carved ivory chess piece is representative of a Queen riding in her chariot.
We are always interested in purchasing Chess Sets / Single Chess pieces / Part Chess sets / Chess Boards etc. from Europe / Russia / India / China / Middle East 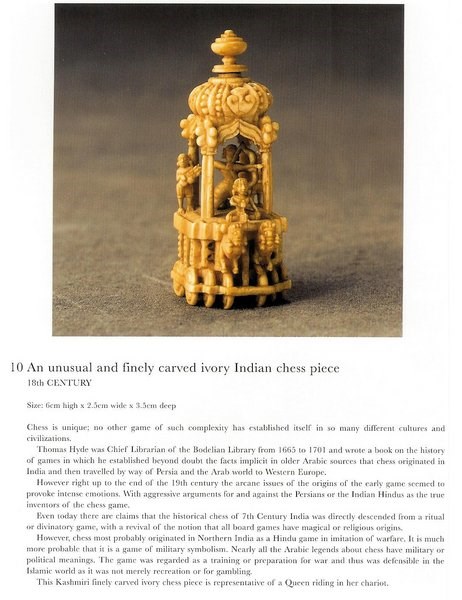