Caption Literature
Mezacala / Guerro stone figure
Late pre-classic circa 300-100 BC grey calcite with traces of red pigment in recessed areas
22 cm high
This ancient Mexican stone figure is carved in relief with attenuated arms cut deeply away with squared shoulders, his hands showing his long fingers folded at the hip, short legs and stylized feet, with a raised triangular nose and drilled eyes. He is of an unusual variant most probably originating from the Guerrero, Central Highland region rather than that of the Southern Highlands where the 'Chontal' style of Mezcala figure is found.
This superb figure comes from the collection of the 20th century post war artist, Josef Herman who was always interested in finding pieces for their 'monumentality on a small scale'. He marvelled at the forms and abstraction in tribal art and must surely have been impressed by the pure primitivism of the form and subject of this piece. 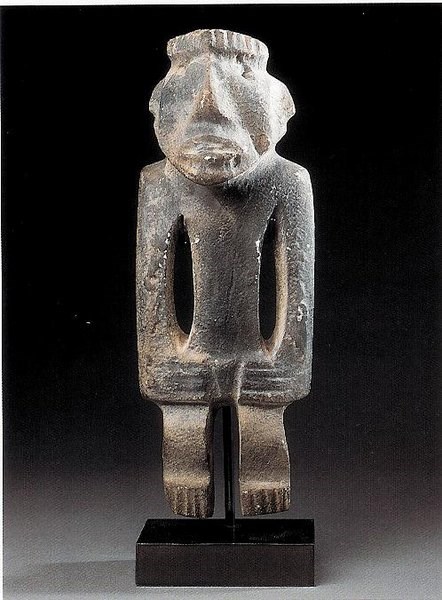