Caption Literature
A Maori Chiefs staff 'Taiaha' New Zealand
Wood and haliotis shell, fine even honey brown patina
Early 19th Century
( staff on left sold )
B - (right) 146 cm high
All highly born Maori males carried these staffs as insignias of rank. They were used to emphasise points of oratory, for hand to hand combat and in ceremonial displays. It could be used as a parrying and sparring weapon and the movements associated with their use was a codified system of blows and manoeuvres and an art that was carefully taught.
Important staffs were given magical powers and were used for divination purposes. Hamilton observed in 1896 their use in determining the result of a future battle 'The usual method adopted was to lay the Taiaha upon the ground before the war party while the Tohunga (priest) performed the usual Karakias (incantations). Then if the Gods were propitious, the Taiaha would turn itself slowly before the eyes of the assembled tribe, to the utter confusion of the enemy'.
This example has a finely detailed carving of a Janus head. 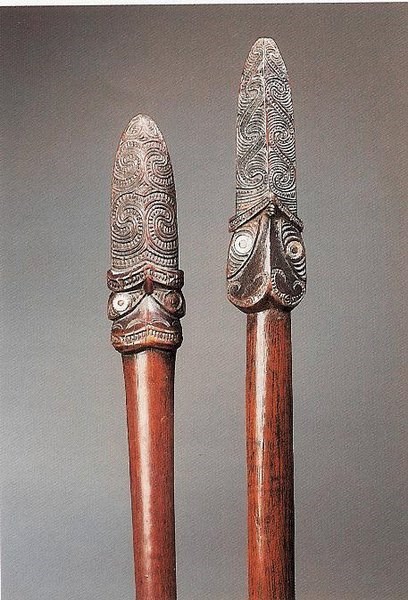