The Prospect of Dunster Castle from Enstaw Wood, as you come from Grahampton, Exactly delineated by GEO: WOOD 1735

Caption Literature
The Prospect of Dunster Castle from Enstaw Wood, as you come from Grahampton, Exactly delineated by GEO: WOOD 1735


The Gatehouse or Old Castle


Roch Hoad or Road to Alcombe


Cundick Lane or Road to Grabbis


The New Walk to Ye Bowlingreen


The Town of Dunster

The Prospect of Minehead - Key, from Cunagree near Dunster exactly delineated by Geo: Wood 1735

These two paintings are in the naí¯ve style of an estate cartographer. By George Wood, dated 1735 they portray a marvellously 'English' 18th century pastoral landscape with castle and a town with its seaside harbour. Dunster Castle, a castellated mansion, now National Trust, was originally built as a Norman stronghold around 1070 by William De Mohun, courtier of the Counqueror and Earl of Somerset, and then held by the Luttrells from 1376. The painting shows the house or 'castle', as no trace of the original Norman castle remained by the 18th century, before its 19th century alterations. In the centre of the faí§ade is the chapel designed by Sir James Thornhill in 1722 and then demolished in 1868. The battlemented skyline depicted in the painting has now the 19th century embellishment of the drawing room tower by the architect Anthony Salvin who remodelled the entire property between 1868 and 1872 on the instructions of George Fownes Luttrell. In the early 18th century a bowling green was laid out at the summit of the tor on the site of the keep an octagonal summerhouse was built and both can clearly be seen in this watercolour. These two paintings were executed during the life of Alexander Luttrel (1705-37) who died leaving considerable debts and an only daughter ages eleven. A receiver was appointed and the castle shut up. It is said that only the family plate was sold, but perhaps other things left the castle then too.
The Prospect of Minehead' in painted from the hill behind Dunster Castle which is a well-known landmark for sailors. The name Minehead is derived from the Welsh Mynydd, 'a Mountain'. Minehead acted as the first line of defence for the original Norman Castle, and its safe harbour was always important in terms of trade and supplies to the castle and surrounding area. Minehead was represented by two members of Parliament and from the first election the Luttrell family controlled at least one of these seats, always on the electoral platform of furthering local interests at Westminster. Minehead was therefore a 'pocket burough' and was disenfranchised under the Great Reform Bill in 1832. Thus in the 18th century the town was always considered by the Luttrell family to be part of the Dunster Castle Estate.

The Prospect of Dunster Castle from Enstaw Wood, as you come from Grahampton, Exactly delineated by GEO: WOOD 1735 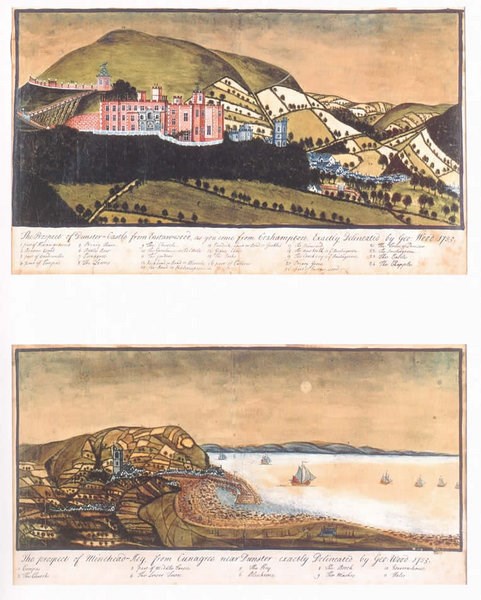