Size: 20cm high, 14.5cm wide, 10cm deep - 8 ins high, 5¾ ins wide, 4 ins deep
Papua New Guinea Middle Sepik River Iatmul Area Carved Wood Ancestor Portrait Head with Inlaid Shell Eyes
The first European travelled up the Sepik River late in 19th century, 1886, when the protectorate was being established and New Guinea was called Kaiser Wilhelmsland. Placed under the tutelage of the Emperor the ‘Neu Guinea Compagnie’ managed every aspect of the country, the plantations, all geographic, naturalist and ethnographic research, the administration, public health, communications by boat, and the very lucrative trade in the hunting of birds of paradise and the exportation of their feathers.
The Iatmul are now the most well known and largest community living in the Sepik region, numbering around sixteen thousand people. The majority of their villages are on the banks of the river Sepik. All have a dance ground at the centre and ceremonial houses looking over the central dance area at each end. All dwelling houses are raised on stilts  to avoid the seasonal floods of the river when canoes become the only means of travel.
Warfare was conducted on a small scale and was usually limited to ambushes and well planned raids of enemy villages where trophy heads would be taken. Men were accorded status, prestige and power through headhunting, and only after taking an enemy’s head would a man be entitled to wear on ceremonial occasions the distinctive face paint, or particular ritual insignia such as the homicide aprons. However, the over-modelled skulls known as ‘Midjangu’ or ‘Kaik’ were those of identifiable ancestors rather than of those taken in headhunting raids. The technique of over-modelling enabled the creation of portraits of the dead which were masterpieces of artistic expression. Mostly kept by families of the deceased, they were also displayed in the ceremonial house on painted racks or in swaying baskets suspended from the roof of the upper chamber. Sometimes they were placed at specifically constructed openings in the facade where they would gaze down on events on the performance ground and keep watch against enemy headhunting parties.
As a memorial to an ancestor, an over-modelled skull was an important ceremonial object and when it suffered damage or became too fragile for display, a replacement would be carved. The design of the wood heads would always accentuate the nose as it was considered an attractive facial feature in men, a sign of ‘Tshvia’, an assertive personality. 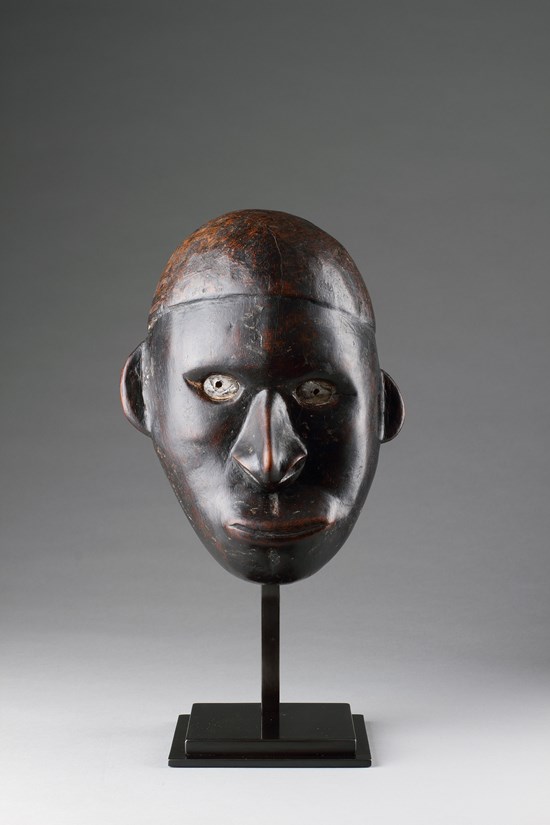 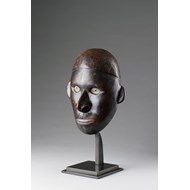 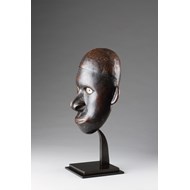 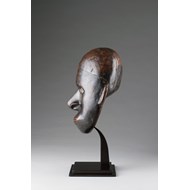 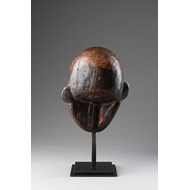 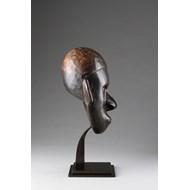 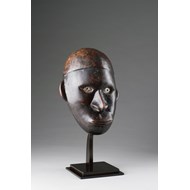 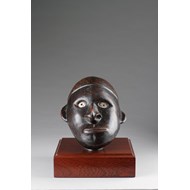 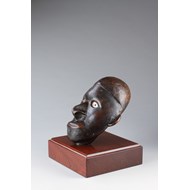