cf: Kimbell Art Museum Fort Worth Texas has a similar sculpture illustrated ‘In Pursuit of Quality’ page 111
Mathura Museum has a similar figure found at the Mound of Katra in the Northern District of Uttar Pradesh (Inv. no. A1)

A Fine and Rare Ancient Kushan Northern India Uttar Pradesh Monumental Red Sandstone Torso Fragment of the Buddha
Mathura was the eastern capital of the Kushan Empire situated on the right bank of the river Yamuna, a tributary of the Ganges around 100 miles south of Delhi in Uttar Pradesh. Sited at the junction of India's trade routes, the city by the 1st century AD was a thriving religious and commercial centre. Ptolemy described it as a ‘City of Gods’. Hinduism, Buddhism and Jainism all coexisted peacefully together with the worship of nature spirits. Mathura’s heyday lasted from the 1st to 3rd century until the Sasanian incursions began around 350 AD, and despite a revival under the Gupta rulers of the 4th to 7th centuries, the city never regained its former glory.
The sculpture produced in Mathura was typically made from a locally quarried mottled red sandstone, and stylistically was full figured and sensual, with both religious and secular subjects shown dressed in diaphanous clothing with multiple folds. Although essentially Indian, the influences of ancient Greece and Rome, assimilated via the Silk Road can be seen.
This beautiful sculptural fragment was probably a seated figure of the Buddha known as a ‘Kapardin’ image after the curl of hair ‘Kaparda’ that was shown on his head. These Mathura images are important as they are the first appearance of the Buddha in human form. Formerly he was represented in anionic form, as a wheel or ‘chakra’, a pair of footprints or a lotus.
Ex Private American collection
Exhibited Spink & Son London ‘Treasures from the Silk Road’ no. 2, November 1999
Ex Private U.K. collection
Exhibited Richard Philip London June 2009
Ex Private English collection
Exhibited Spink & Son London ‘Treasures from the Silk Road’ no. 2, November 1999 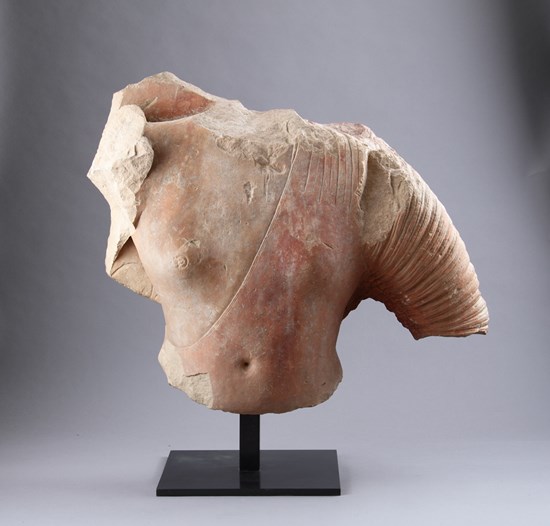 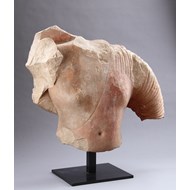