Caption Literature
A Pair of Native American Central Plains Cheyenne Child’s Deer Hide Moccasins Decorated with Glass Seed Beads Sewn in Traditional Geometric Patterns
Circa 1870 - 1890
Size: 12.5cm long - 5 ins long
Before the coming of the white man, clothing was fashioned from the hides of elk, moose, buffalo, mountain sheep and deer or antelope. Usually it was the women who were responsible for stretching, cleaning and tanning the hides although in some tribes these tasks were undertaken by the men. The cutting of the hides was done in a prescribed way according to the garment being made. Early moccasins were not usually decorated, but quill and beadwork adornment became common in the late 18th and 19th centuries, with beadwork largely replacing dyed porcupine quillwork by the 1850’s. Fashioned especially for a special ceremonial dress occasion, the designs on these small moccasins were meant as a talismanic protection against danger, and the loosely stitched hide soles allowed for the baby’s growth. 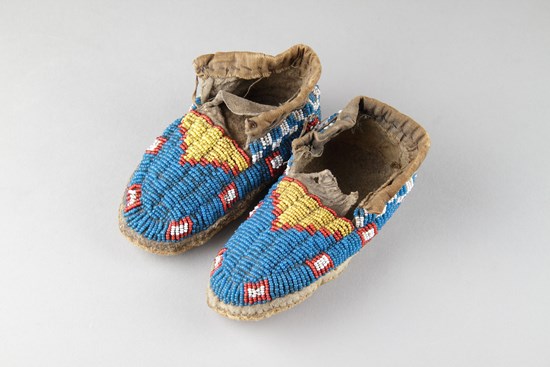 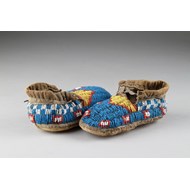 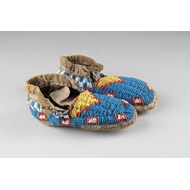