Caption Literature
A Rare Papua New Guinea Trobriand Kiriwina Island Massim Carved Boat Shaped Betel Nut Mortar
Decorated with a scroll pattern to the border infilled with white lime the side with inventory number in white ‘4741’ and ‘New Guinea Webstr. 1898. P.’ in yellow
Standing on a Pitt Rivers Museum base inscribed in yellow: ‘Mortar for Crushing the Betel Nut in Form of a Boat Ornamented with Broken Coil Pattern New Guinea’
Mid 19th Century
Size: 7cm high, 15cm wide, 3cm deep - 2¾ ins high, 6 ins wide, 1¼ ins deep
Kiriwina is the largest of the Trobriand Islands and the entire Massim region’s contact with the west intensified in the last decade of the 19th century. Many Christian missionary stations were established during this period and consequently artefacts from the area were collected and taken back to Europe at this time, but most objects are now in museums and do not often appear on the open market.
Betel nuts are the seed of the Areca palm and the main stimulant used on the islands, although locally grown tobacco is also used. The main ingredients needed for chewing betel are the nuts, the fruit or leaf of the betel plant and lime made by burning coral. People with good teeth crush the nut, add the betel plant fruit and a little lime taken from a pot with the aid of a lime spatula. However, the elders of the community with fewer teeth use a mortar and pestle to crush the betel nut.
The art of the Trobriand Islands is distinguished by its refined curvilinear style. Objects are carved from ebony, black palm and turtleshell and then decorated with incised motifs that are filled in with lime to accentuate the designs. The Massim believe that all human activities can be furthered or hindered by magic, and material objects can play a role in this. A lime spatula or betel nut mortar over which the appropriate magic has been performed can greatly affect, even kill, a person to whom it is lent for use. 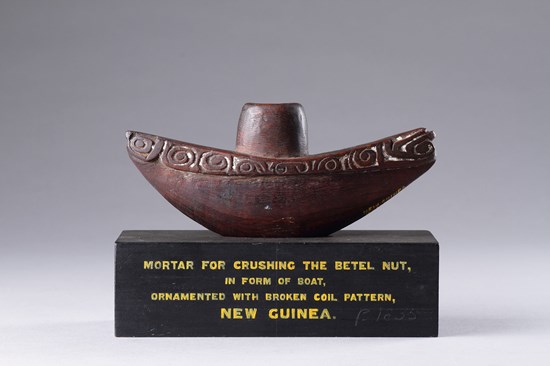 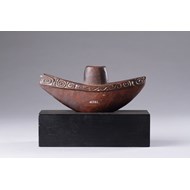 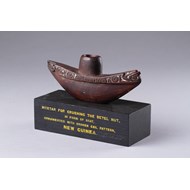 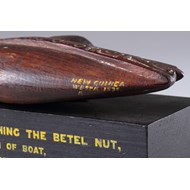 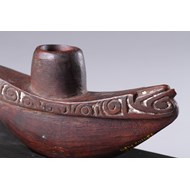 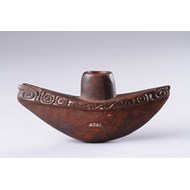 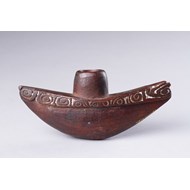