Caption Literature
A Curious German Oil on Canvas of a White Tailed Deer with Unusually Curved ‘Foundering’ Hooves Set in an English Country Park
By Wolfgang Dietrich Majer (Bernloch 1698 - 1762 Tí¼bingen)
Signed and dated bottom right ‘Majer 1754’
18th Century
Size: 53.5cm high, 43cm wide - 21 ins high, 17 ins wide / 62cm high, 52cm wide - 24½ ins high, 20½ ins wide (framed)
More usually known for his portraits of the German professional classes, Majer was living in England when he painted this curious phenomena. Between 1750 and 1755 he settled and worked in London with his son Jeremias Meyer (1735 - 1789) who became an important miniaturist as Painter in Enamels to George III and Painter in Miniatures to Queen Charlotte. He was also one of the founders of the Royal Academy and friend of Sir Joshua Reynolds.
Wolfgang Dietrich Majer was presumably commissioned to paint this exotic deer with deformed hooves in 1754, which he uncharacteristically signed. The deer was most probably kept in captivity as a pet within a country park and had been overfed on a rich diet of corn. This results in a chronic build up of acid in the hoof plates and causes the deer great pain. In order to ease this the deer walks on the back of each hoof and as the front no longer has any contact with the ground, the tips of the hooves do not wear down and so curl strangely upwards. These elongated curled hooves are known as ‘foundering’ and are the result of too many carbohydrates being fed to the deer over a very short period. 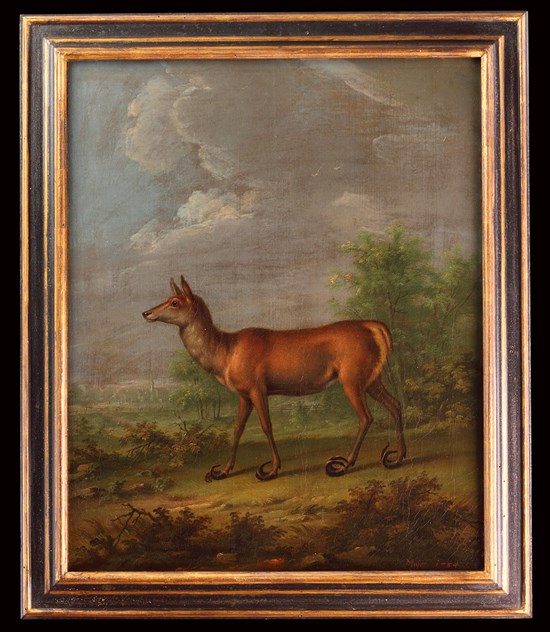 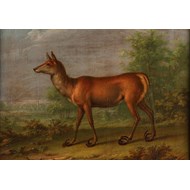