Caption Literature
An Alaskan Yup’ik Eskimo Carved Walrus Ivory Amuletic Figure of a Young Caribou a Blue Glass Trade Bead Fastened to its Mouth
19th Century
Size: 3cm high, 9.5cm long, 2.5cm wide - 1¼ ins high, 3¾ ins long, 1 ins wide / 9.5cm high (on base) - 3¾ ins high (on base)
The most important land animal to the Eskimo was the barren ground caribou, a form of wild North American reindeer. Large herds of caribou once roamed throughout the upland regions of the Yukon, but by the end of the 19th century only one herd was left on Nunivak Island. In some areas, such as the interior of North West Alaska and the barren lands west of Hudson Bay, caribou were the foundation of the entire economy.
Caribou are always on the move and there is a broad regularity in their migrations. They spend the summer on the tundra and the winter inside the tree line, and over thousands of years the Yupik learnt to ambush these quick moving animals as they passed a certain point. Of course the hunters could never be sure of which route the caribou would take, but by checking the weather and ground conditions they could make an educated guess and position themselves accordingly. They also consulted the shaman and with his help the appropriate spirits would guide the caribou’s movements in the most desirable direction.
Amulets such as this are believed to portray the young unborn animals in the womb, having immature features, shown in a crouching position with thin legs and detailed hooves. Foetal caribou are taken during the spring hunt before their mothers give birth and their soft hide is prized for clothing. The function of the amulet, perhaps used by a shaman, is to insure the continued abundance of the species rather than to promote a successful hunt. 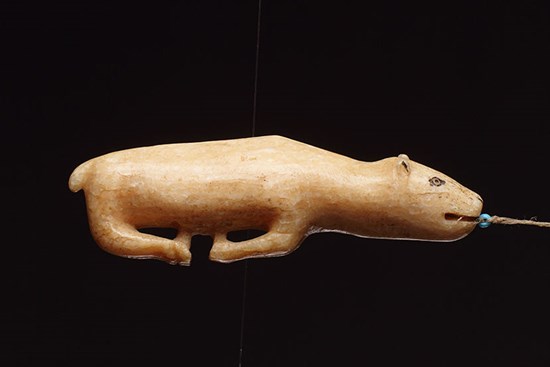 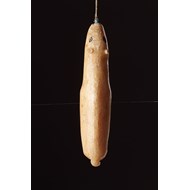 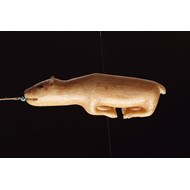 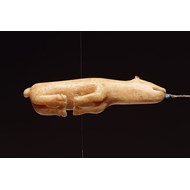 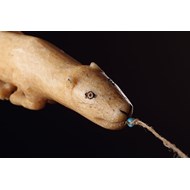 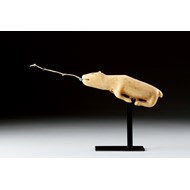 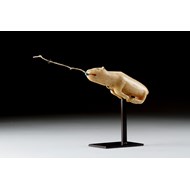 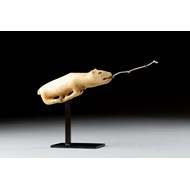 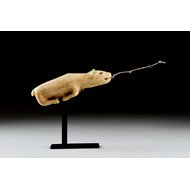 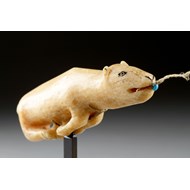