Caption Literature
An Unusual Netherlands Bronze Swan Collar Etched with ‘Baarland’ the Name of the Owner and the Castle where it lived on the Water of the Moat Complete with original bronze pin
17th Century
Size: 6cm high, 7cm dia. (max) - 2¼ ins high, 2¾ ins dia. (max) / 10cm high - 4 ins high (with base)
Originally a native of northern Europe the mute swan ‘Cygnus Olor’ was domesticated early on and raised in captivity first for its meat, and later for its great beauty. Medieval records show that there were domesticated flocks in Britain just prior to the 12th century and that swans were regarded as the property of the Crown. They could only be raised and traded under royal licence enforced by the King or Queen’s Swan Master and his deputies. Today an annual ceremony of ‘swan upping’ is still performed on the River Thames in July where all mute swans are rounded up and marked for ownership either by the Crown or by the Vintners and Dyers Livery Companies, who were granted rights of ownership in the 15th century. The welfare of the birds is still taken seriously at this event at which they are inspected, weighed and ringed or marked with a nick to the beak.
However, in the Netherlands hundreds of swans were owned by ‘zwanendriften’ or ‘swan herders’ in a tradition dating back to the Middle Ages. The young swans were caught and their wings pinioned so that they could not fly and their beaks marked with a tattoo of ownership. Upon their release as they could not fly they spent the winter stranded on the frozen marsh and ponds walking in search of food. At around two years of age they were caught by the herders by means of a wire loop around their neck and sold primarily for meat. This practice continued into the 21st century and was only recently outlawed in January 2017.
This bronze collar was most probably made as a form of protection for the swan belonging to the owner of Baarland Castle, and would have prevented it from being taken by the ‘swan herders’ from the castle moat. 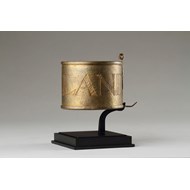 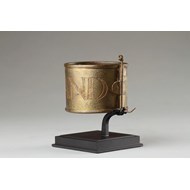 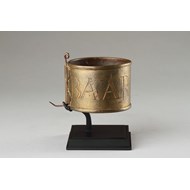 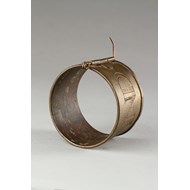