Caption Literature
A Fine William IV Marble Bust of Sir John Rennie (1794 - 1874) Civil Engineer and Builder of London Bridge by his Cousin the Sculptor George Rennie (1802 - 1860)
Inscribed to the Reverse ‘Sir John Rennie. G. Rennie Sculptor 1831’
Circa 1830 - 31
Size: 73.5cm high - 29 ins high
George Rennie was born at Phantassie, East Lothian in 1802 the son of an agriculturist (1749 - 1828) and the nephew of John Rennie the Elder, an engineer (1762 - 1821). As a young man in the 1820’s he travelled to Rome to study sculpture and it is believed that he was a pupil under Bertel Thorvaldsen. By 1828 he had returned to London and exhibited his most famous classical work ‘The Archer’ at the Royal Academy, about which the New Monthly Magazine commented that the almost naked figure showed an ‘admirable knowledge of anatomy’. It can still be seen in the Athenaeum Club.
This bust of his cousin Sir John Rennie was exhibited at the R.A. in 1831 when he also showed a bust of Thorvaldsen. He had a preference for sculpture in the ‘after the antique’ classical style and two of his works that display this exist in the collections of the Duke of Devonshire at Chatsworth House, a figure of ‘Mars’ and a bust of ‘Alexander’.
In the 1830’s Rennie became concerned with the improvement of the state of the arts in Britain, and became involved with radical politician Joseph Hume in his efforts to obtain public freedom of access to all monuments and works of art in public buildings and museums. In 1836 he suggested to the Liberal William Ewart that a special parliamentary committee should be formed leading to the establishment of the School of Design at Somerset House. He was one of the first artists in London to conceive the idea of bringing ‘Cleopatra’s Needle’ to the capital. His plan and design submitted for the 1839 competition placed the ancient Egyptian obelisk as a main feature of the National Monument to Admiral Nelson in Trafalgar Square. In 1841 he was elected Liberal M.P. for Ipswich. Six years later he became a Governor of the Falkland Islands enjoying great diplomatic popularity and achieving success in the economic development of the Islands. He returned to London in 1855 and died at his home in Regents Park in March 1860.
His cousin, Sir John Rennie (1794 - 1874) was the second son of the Scottish civil engineer John Rennie the Elder F.R.S. F.R.S.E. (1761 - 1821) who designed many bridges, canals and docks including Waterloo Bridge which Canova called ‘the noblest bridge in the world’, and said that ‘it is worth going to England solely to see Rennie’s bridge’.
The younger Sir John Rennie was placed by his father in 1813 under the tutelage of the resident engineer of Waterloo Bridge, and by 1815 was assisting his father in the erection of Southwark Bridge. In 1819 he travelled to the continent to study the great engineering works of Europe. When his father died in 1821 he and his brother George Rennie (1791 - 1868) ran the business as J & G Rennie becoming heavily involved in completing the many projects and colossal schemes of engineering that their father had initiated. He undertook to run the civil engineering portion of the firm whilst the mechanical side was supervised by his brother.
Sir John Rennie’s most famous work was the building of London Bridge to the designs of his father. The bridge was completed and opened in 1831, the year he was knighted. Presumably this marble bust was sculpted and exhibited at the R.A. by his cousin in that year in honour of his Knighthood. 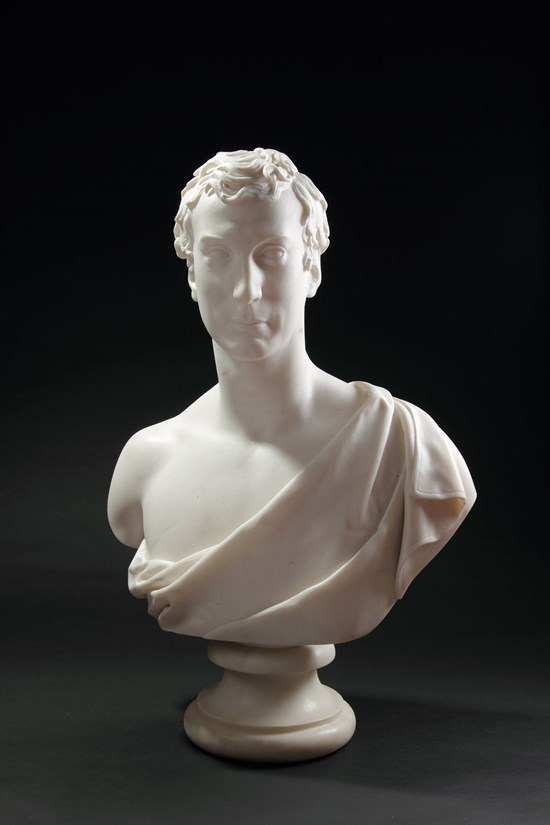 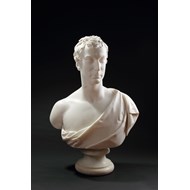 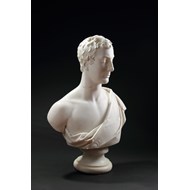 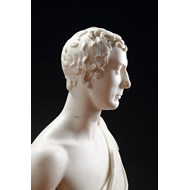 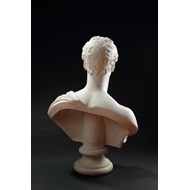 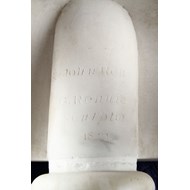 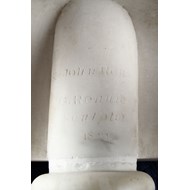