Caption Literature
A Fine Netherlandish Baroque Ivory Plaque in High Relief of the Annunciation of the Virgin carved with a silhouette revealing a shaft of heavenly light descending from the Holy Ghost the Angel Gabriel holding a Madonna Lily foretelling the Virgin of her fate Her hands crossed in supplication the velvet drapery held aloft by two Cherubs
Circle of Francis Van Bossuit (1635 - 1692)
Third Quarter 17th Century
Size: 21cm high, 12cm wide, 2cm deep - 8¼ ins high, 4¾ ins wide, ¾ ins deep
Francis Van Bossuit was born in Brussels and trained in Brussels and Antwerp before going to Italy around 1655-1660 where he became member of the Netherlandish artists guild in Rome. By 1685 he had returned to the Netherlands and settled in Amsterdam. He specialised in ivory plaques carved in high relief, often with the background finely cut to reveal light shining through the scene as in a silhouette. He took his inspiration from the master painters of the baroque such as Titian for the religious and classical subjects of his plaques, which are distinguished by the skill of his carving. Before his death in 1692, he had an influential role in bringing the Roman baroque style in ivory sculpture to Northern Europe. 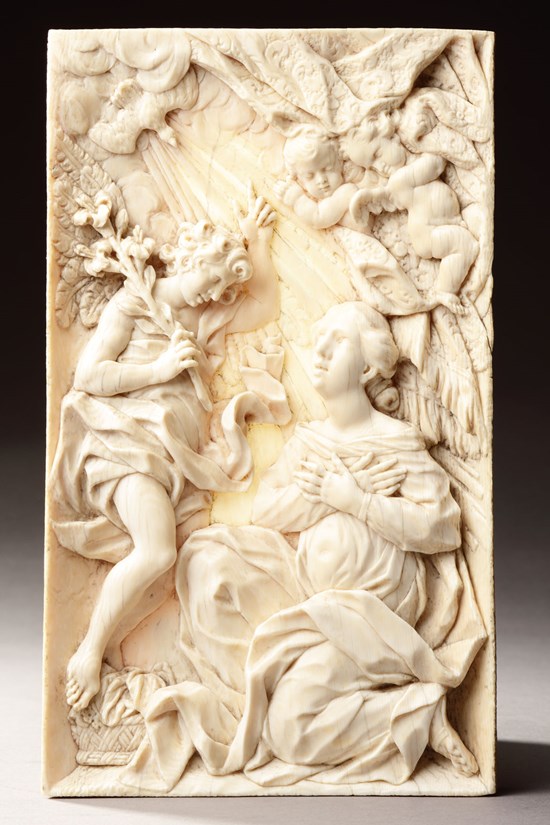 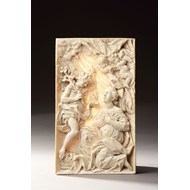 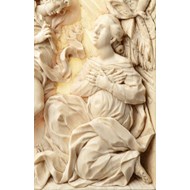 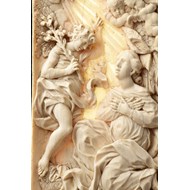 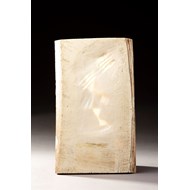