Caption Literature
A Himalayan Nepalese Hindu Ritual Libation Horn the Copper Spout Formed as the Head of the Sacred Bull ‘Nandin’ inlaid with Gold Silver and Turquoise the horn body with copper rim
17th Century
Size: 13.5cm high, 19cm deep, 8cm dia. - 5¼ ins high, 7½ ins deep, 3 ins dia.
Shiva is a living god. He is existence with all its paradoxes and beyond existence he is the indefinable absolute. The phallic ‘linga’ is a symbol often carved in stone marking the presence of the invisible transcendental reality of Shiva. The word ‘linga’ means ‘sign’ and particularly refers to the male sign of sex, the phallus. In the world of Shiva the significance of the linga is comparable to that of the cross in the christian world.
The immovable solid shape of the ‘linga’ occupies the central position in the worship of Shiva. Post or pillar shaped it is carved of stone, wood or cast in metal and takes the form of an erect phallus. In a temple the linga is placed in the innermost sanctuary and one or four faces of the god may project from its shaft. ‘Nandin’ the bull whose name means ‘giving joy’ is carved in an image of a couchant bull and placed opposite the linga stone as he is Shiva’s devoted attendant. Ritual horns such as this contain perfumed oils that are used in ceremonies poured drop by drop over the linga stone whilst chanting and prayers take place. In Hinduism it is believed that no object in the world of Shiva is more sacred than the ‘linga’. 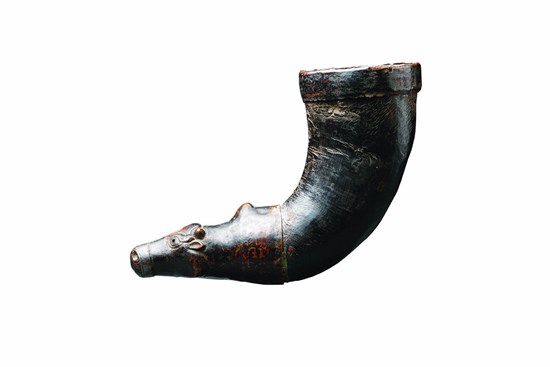 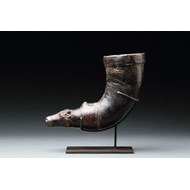 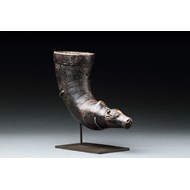 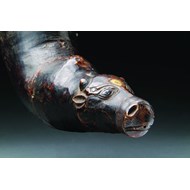