Caption Literature
An Unusual Sailors-Work Atlantic Steamship Portrait Panel Carved of Ivory Horn and Tortoiseshell
Perhaps American
Late 19th Century
Size: 10.5cm high, 15cm wide, 1cm deep - 4 ins high, 6 ins wide, ½ ins deep
â€¨See: Finch & Co catalogue no.17, item no.142, for another example
Ships are among mankind’s oldest and important means of transport and sailors, in the time when voyages lasted months and sometimes years, became skilled in many crafts during their long periods of enforced idleness. The works of art produced by these seafarers have not yet been accorded their true place among the great artistic traditions, despite being eagerly sought after by collectors.
The tall smoke stack as depicted in this portrait was a mark of the old style 19th century steamer ship. The stack rose almost to mast height in order to dispel dangerous wood sparks and coal smoke. When this portrait is laid against a window pane the light shines through the blond horn panel producing a glowing three-dimensional effect. 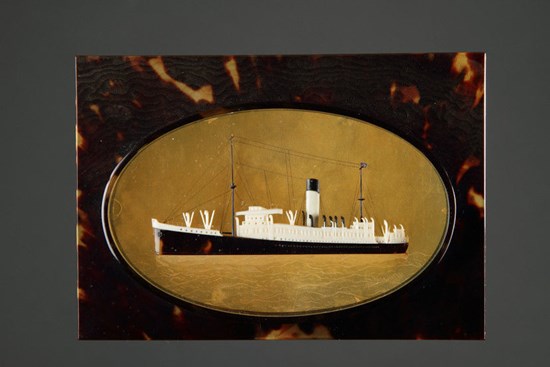