Caption Literature
An Interesting New Zealand Gold Mounted Black Maire Wood Royal Presentation Stock Whip Made by George Dowse and John Thompson Telfer of Dunedin
An inscription engraved to the gold mount ‘Presented to HRH The Duke of Edinburgh by the Stockmen of Dunedin, Ottago, April 1869’
19th Century
Size: 37cm long, 3.5cm dia. (max) – 14½ ins long, 1¼ ins dia. (max)
Commemorating the first visit to New Zealand by a member of the British Royal family this stock whip was presented to Prince Alfred Duke of Edinburgh by the cattle ranchers of Dunedin. The Daily Southern Cross newspaper reported on the 10th May 1869 ‘After the race for the tradesmen’s plate at Dunedin, a very handsome gold mounted stock whip was presented to HRH The Duke of Edinburgh by Mr Wingfield, representing the Stockmen of Dunedin. The presentation took place in the marquee, Mr Wingfield being presented to his Royal Highness on the occasion by F Wentworth Esq. His Royal Highness expressed his gratification at the reception of the present, and shook Mr Wingfield heartily by the hand. The whip was furnished by Mr G Dowse, and the gold mounting manufactured by Mr Telfer, both of Rattray Street.’
Prince Alfred was born at Windsor Castle in 1844 and was second in line of succession to his brother, later King Edward VII. He was destined for a career in the Royal Navy and as the Commander of HMS Galatea, and newly created the Duke of Edinburgh, in 1867 he embarked on a world tour. He became the first member of the British Royal Family to visit Australia where he narrowly survived an assassination attempt. He arrived in New Zealand in 1869 where he was greeted with great enthusiasm. In 1871 Prince Alfred married the Grand Duchess Maria Alexandrovna, daughter of Alexander II of Russia, and in 1893 succeeded his uncle Ernest II as Duke of Saxe-Coburg and Gotha. Prince Alfred died in 1900. 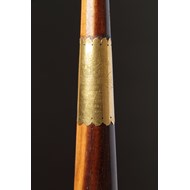 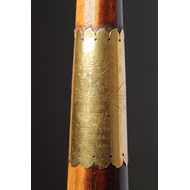 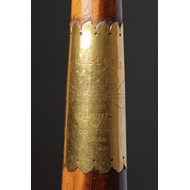 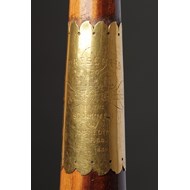 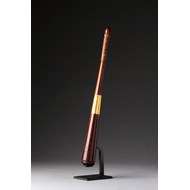 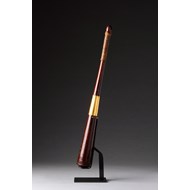 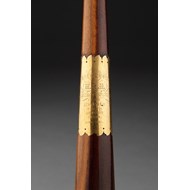