Caption Literature
A Rare Antique Taxidermy Specimen of a Galapagos Islands Tortoise with Domed Shell ‘Geochelone Elephantopus Darwini’ from James Island
19th Century
Size: 25.5cm high, 26cm long, 46cm wide – 10 ins high, 22 ins long, 18 ins wide
See: Finch & Co catalogue no. 6, item no. 31, for an example of a Giant Galapagos Islands Tortoiseshell ‘Geochelone Nigra’
With a huge carapace, massive limbs and a long neck the Galapagos tortoise is the largest living tortoise in the world. This is partly due to its adaptation to living in an environment with an unreliable food supply as the larger the tortoise the more food it can store. The species with domed shells generally graze on grasses whilst those with saddle-backed shells are adapted for browsing shrubs.
By 1875 they were so reduced in number it took Commander Cookson over a fortnight to find a single specimen on Indefatigable Island. However, since 1965 the Charles Darwin Research Station has worked hard to eradicate the non-indigenous feral goats, rats and pigs on the Islands that eat the tortoise’s eggs and have run a successful breeding programme boosting their numbers considerably, with the Ecuadorian National Park Service recently estimating a population of 3000 to 3500 individual tortoises. 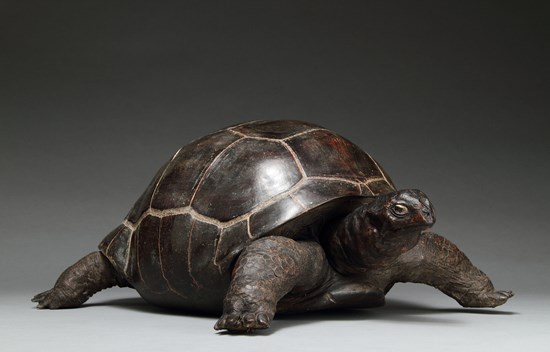 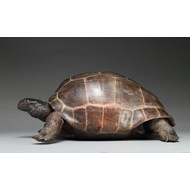 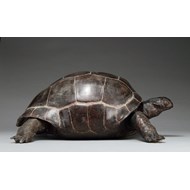