Caption Literature
A English Carved Beechwood Articulated Artists Lay Figure
Early 19th Century
Size: 86cm high – 34 ins high
See: Finch & Co catalogue no. 4, item no. 70, and catalogue no. 14, item no. 28, for other examples
Lay figures were used by painters and sculptors in place of living models when they were working on drapery and composition. They represent the ideal proportions of the human body and are made with pivoted ball joints allowing for a natural bending and turning of the limbs, head and torso. The faces were deliberately expressionless and the androgynous features of the head enable it to be dressed convincingly as either a man or woman.
The use of the lay figure probably originated in ancient Greece where they assisted the classical sculptors in the posing of bare limbs. However, Vasari maintains it was Fra Bartolomino, the Italian Renaissance artist (1472 – 1517), who first devised a wooden, life size, fully articulated lay figure. Traditionally these three-dimensional sculpted wooden models were used as an ‘aide-mémoire’ for an artist’s two dimensional work, a tradition that was perpetuated in the 20th century animation studios of Walt Disney. 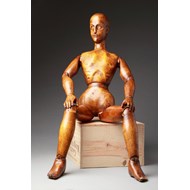 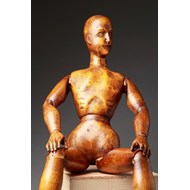 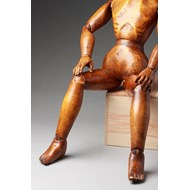 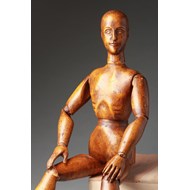 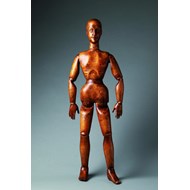 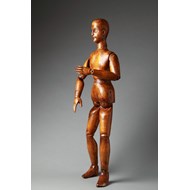 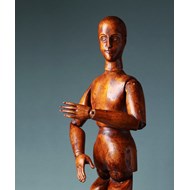 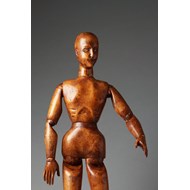