Caption Literature
A New Zealand Maori Carved Wood Pinnacle Figure ‘Tekoteko’ from a ‘Pataka’ or Chief’s Storehouse the Tiki Figure with a Spiral ‘Moko’ Tattoo to the Top of his Arm his Three Fingered Hands of Simple Sculptural Style
An old ink inscription to the side of the head ‘Otaheite NC’
Probably from the Waikato Area on West Coast of the North Island
Old Dry Patina Covered with Dark Red Pigment
The left side of the head and the legs missing, the curving buttocks with ancient pitch repair
18th Century
Size: 22.5cm high, 4cm wide, 6cm deep – 8¾ ins high, 1½ ins wide, 2½ ins deep
33cm high – 13 ins high (including base)
cf: W.O.Oldman Collection Dominion Museum, Wellington, New Zealand has a very similar figure but with ornamentation. ‘The New Zealanders Illustrated’ London, 1846, by G.F.Angas shows a Pataka on the shores of Lake Taupo with a similar pinnacle figure
‘Pataka’ were primarily used as food stores, but were also used to safeguard the rare and valued possessions of the Chief. Differing regionally in size and type, they ranked with superior carved houses as the most important structures in a Maori village. The food would be kept inside from the ravages of vermin and from pollution by unauthorised hands. Taboos relating to the possessions and the food of men of high rank were scrupulously maintained with the help of the ‘pataka’ by the whole community. The 19th century artist George French Angas painted a ‘pataka’ at Te Rapa on the shores of Lake Taupo displaying a small pinnacle figure on the central gable of the small raised structure very similar to this example. He stated that the main use of the storehouse was to give protection to the food especially put aside for chiefs and ‘apart from that eaten by slaves and women’.
These pinnacle Tiki or gable peak figures are best viewed from below at an angle of around 45 degrees. The Maori craftsmen were well aware of this subtle perspective and cleverly worked with the optical requirements of architectural space and form. Traditionally said to represent primal canoe ancestors, the comparative shallow surface decoration of this particular example suggests it was produced with a stone adze. 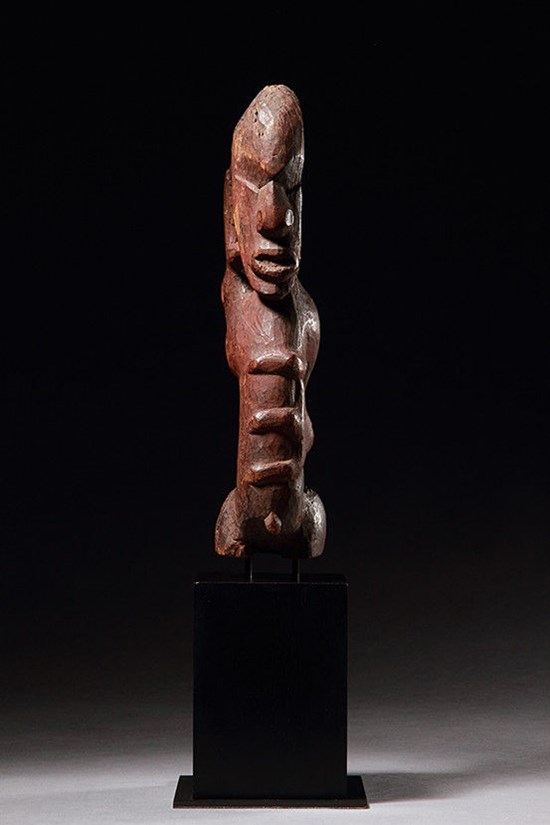 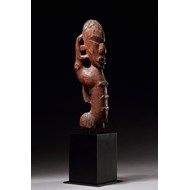 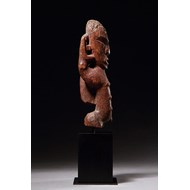 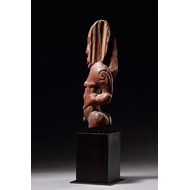 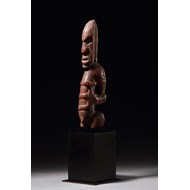 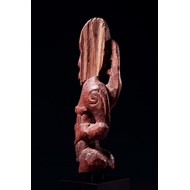 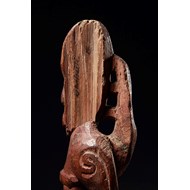 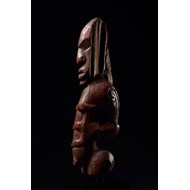 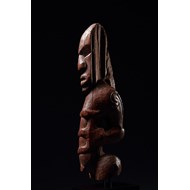 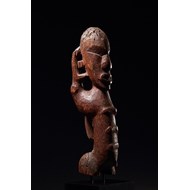