Caption Literature
A Rare Antique Taxidermy Specimen of a Galapagos Islands Giant Tortoise ‘Geochelone Elephantopus Darwini’ James Island/San Salvador
19th Century
Size: 40cm high, 81cm long, 57cm wide – 15¾ ins high, 32ins long, 22½ ins wide
See: Finch & Co catalogue no. 6, item no. 31, for an example of a Galapagos Islands Giant Tortoiseshell
The Galapagos Tortoise is the largest living tortoise species in the world. Six hundred miles west of Ecuador, on the equator in the eastern Pacific Ocean, the Islands originally had about fourteen isolated populations of tortoises, each one separated from their neighbours by either the sea or stretches of impassable molten or hot lava. They are now regarded as all part of one subspecies ‘Geochelone elephantopus’, but in the 19th century were thought to constitute separate species.
Charles Darwin visited James Island in 1835 and described the ‘Cyclopean scene’ of giant tortoises eating cactus. In the 1850’s it was still possible for a whaling crew to collect 300 tortoises on a single visit, but decades of depredations by the whalers, settlers, and introduced rats, goats, pigs, dogs and donkeys made serious inroads into the population and by 1906 only a few tortoises were left. However, today the population has recovered with a successful reintroduction program on most of the Islands and with all natural and indigenous flora and fauna protected.
Living up to 150 years or more Galapagos tortoises reach up to 500 pounds with carapace lengths of over four feet on some of the larger Islands. In 1902 a party from the schooner ‘Mary Sachs’ anchored off Isabella Island and found near the rim of the Sierra Negra, some 18 miles from the shore, what has been described as the largest known Galapagos tortoise. It required 12 men to carry it the last six miles of the distance back to the ship. 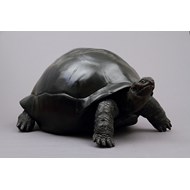 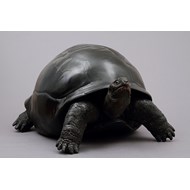 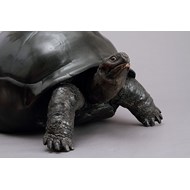