Caption Literature
A Rare English Ivory 24 Sided Educational Throwing Dice Etched with the Letters of Alphabet used to Teach Spelling and Literacy, Upper Case Letters Stained in Red
The letters ‘i’ and ‘u’ doubling for ‘j’ and ‘v’
Late 17th – Early 18th Century
Sizes: 4.5cm dia. – 1¾ ins dia. approx.
The English philosopher John Locke (1632-1704) in ‘Thoughts Concerning Education’ written in 1693 describes his idea for these educational throwing balls (Section 150) ‘â€¦ I have therefore thought that if play things were fitted to this purpose as they are usually to none, contrivances might be made to teach children to read whilst they thought they were only playing. For example, what if any ivory ball were made like that of the royal oak lottery with 32 sides, or rather of 24 or 25 sides, and upon several others a B, on others a C, and on others D? I would have you begin with but these 4 letters or perhaps only 2 at first; and when he is perfect in them, then add another, and so on until each side having one letter, there be on it the whole alphabet. This I would have others play with before him, it being as good a sort of play to lay a stake who shall first throw an A or B, as who upon dice shall throw six or sevenâ€¦’
(section 151) ‘â€¦ To keep his eagerness to it let him think it a game belonging to those above him and when by this means he knows the letters by changing them into syllables he may learn to read, without knowing how he did soâ€¦â€¦I know a person of great quality who by pasting on the 6 vowels (for in our language Y is one) on the six sides of a die and the remaining 18 consonants on the sides of 3 other dice, has made a play for his children that he shall win who, at one cast, throws most words on these 4 dice, whereby his eldest son, yet in coats, play’d himself into spelling with great eagerness without once having been chid for it or forced to.’
(section 153) ‘â€¦with this die also you might have a play just like the royal oak which would be another variety and play for cherries or apples etc.’ 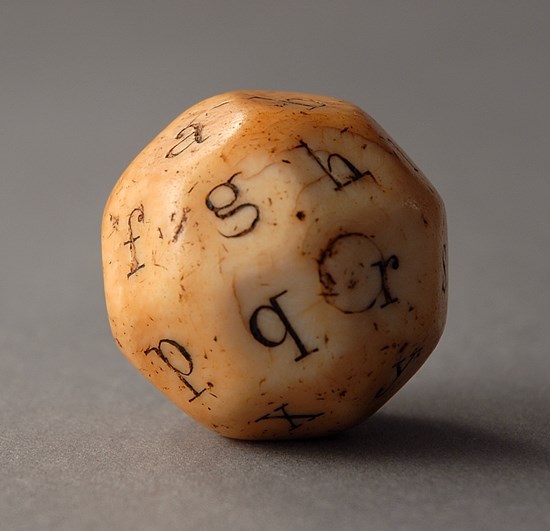 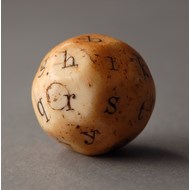 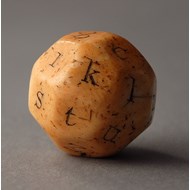 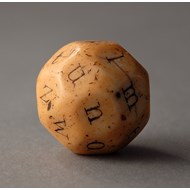 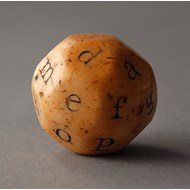 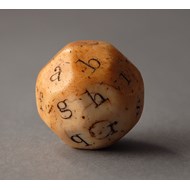