Caption Literature Exhibition
A Rare Export Lacquer Portrait Medallion on Copper Decorated in Gold Hirahaki-E and Kinji on a Roironuri Ground
Late 18th Century
Depicting Herman Boerhaave (1668 - 1738)
Size: approx: 12cm high, 9.5cm wide – 4¾ins high, 3¾ ins wide
14cm high – 5½ ins high
Provenance: Ex American Private collection
See: Japanese Export Lacquer, Oliver Impey & Christiaan Jorg, Hotei Publishing, Amsterdam, 2005 Page: 49, item number 53, for an almost identical medallion of Herman Boerhaave, Dutch Physician, acquired in 1829 for the Royal Cabinet of Curiosities, Rijksmuseum, Amsterdam (inv. NM 6300)
Herman Boerhaave (31st December 1668 – 23rd September 1738) was a Dutch botanist, humanist and physician of European fame. He is regarded as the founder of clinical teaching and of the modern academic hospital. His main achievement was to demonstrate the relation of symptoms to lesions. In addition, he was the first to isolate the chemical ‘urea’ from urine. His motto was ‘Simplex sigillum veri’ Simplicity is the sign of truth.
Boerhaave was born at Voorhout near Leiden. Entering the University of Leiden he took his degree in philosophy in 1689, with a dissertation De distinctione mentis a corpore (on the difference of the mind from the body), in which he attacked the doctrines of Epicurus, Thomas Hobbes and Spinoza. He then turned to the study of medicine, in which he graduated in 1693 at Harderwijk in present-day Gelderland.
In 1701 he was appointed lecturer on the institutes of medicine at Leiden; in his inaugural discourse, De commendando Hippocratis studio, he recommended to his pupils that great physician as their model. In 1709 he became professor of botany and medicine, and in that capacity he did good service, not only to his own university, but also to botanical science, by his improvements and additions to the botanic garden of Leiden, and by the publication of numerous works descriptive of new species of plants.
On 14 September 1710, Boerhaave married Maria Drolenvaux, the daughter of the rich merchant, Alderman Abraham Drolenvaux. They had four children, of whom one daughter, Maria Joanna, lived to adulthood. In 1722, he began to suffer from an extreme case of gout, recovering the next year.
In 1714, when he was appointed rector of the university, he succeeded Govert Bidloo in the chair of practical medicine, and in this capacity he introduced the modern system of clinical instruction. Four years later he was appointed to the chair of chemistry also. In 1728 he was elected into the French Academy of Sciences, and two years later into the Royal Society of London. In 1729 declining health obliged him to resign the chairs of chemistry and botany; and he died, after a lingering and painful illness, at Leiden.
This portrait medallion was made by Japanese craftsmen in Sasaya, Japan under the direction of the Dutch East Indies Company expressly for export to the European market. All executed more or less in the same style and technique they form part of several series of portraits depicting famous historical personalities. The Japanese lacquerer finely and carefully copied prints from ‘L’Europe Illustré’ compiled by Dreux du Radier in six volumes between 1755 and 1765 and published in Paris. It contained 593 depictions of famous people from the early Middle Ages to the mid 18th century engraved by different artists who would often use earlier prints, drawings or paintings as their models.
The Rijksmuseum in Amsterdam has a collection of 19 medallions; some with portraits of historical figures others illustrating Roman Emperors, which is regarded as of documentary importance because of their number and that they were all acquired in 1829 as part of the Royal cabinet of curiosities of King William I in the Hague.
The Japanese export lacquer portrait medallions entering England in the 1770’s may well have influenced Josiah Wedgwood to commercially exploit their popularity and produce his own ceramic medallions of famous figures in blue jasper and black basalt ware, especially as he made a special series for the Netherlands depicting famous Dutch personalities.
NOTE: see other export lacquer plaques on our website, available individually or as pairs 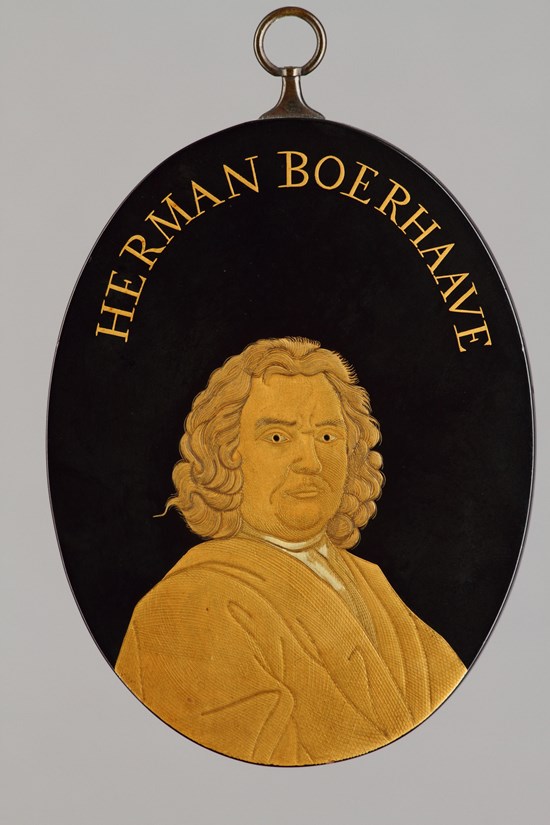 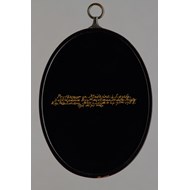