Caption Literature
A Fine Japanese Carved Boxwood Netsuke Depicting a Human Skeleton Attacking a Wolf the Fur Well Rendered the Ivory Eyes Inlaid with Horn
Signed Shoko, Hida School
Mid 19th Century
Size: 4.5cm high, 5.5cm long, 2 cm wide – 1¾ ins high, 2¼ ins long, ¾ wide
cf: Raymond Bushell: Netsuke Hanbook, no. 199, for a very similar Netsuke by Shoko, and Neil Davey: Netsuke, no. 741, for another Netsuke by Shoko of a skeleton mixing Miso, Ex Mrs Isobel Sharpe collection
This is a fine netsuke by the naturalistic craftsmen Shoko of the Hida School who specialised in carving wood netsuke of animals and figures. He was particularly fond of showing his skill at carving skeletons, which were perfectly anatomically correct.
The subject matter is probably an allusion to the legend of Komachi and Fukakasa Shosho. Fukakasa was a tempestuous general who lost his life in a vain effort to prove his love for Komachi, while she survived into a loveless old age. To the Japanese the tempestuousness of Fukakasa symbolised by the wolf, and the pride of Komachi symbolised by the skeleton, allegorise the vanity of life. 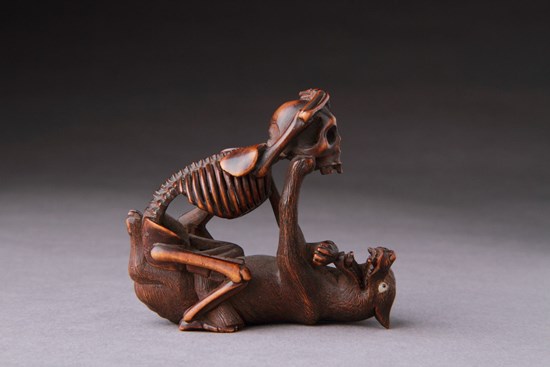 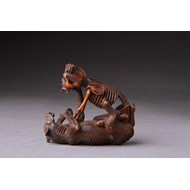 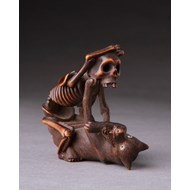 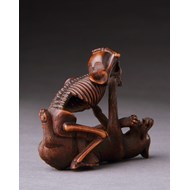