Caption Literature
A Magnificent Large and Rare Pair of Nepalese Cast Bronze Fantastical Lion Dogs the Male and Female with Tails Held High Richly Scrolled Manes and Wings standing on Clawed Paw Feet Snarling with Long Protruding Tongues
Punched geometric design and engraved floral patterns on face and chest
Traces of gilt, red and blue pigment, black lacquer
The underside fitted with a receptacle for relics
18th Century
Size: 27cm high, 34cm long, 15cm wide – 10½ high, 13½ ins long, 6 ins wide
An animal representing natural and supernatural forces, and suggesting power and virility, the lion is a symbol of the Buddha and historically of the authority of Tibetan sovereigns and the Dalai Lama. High-ranking Tibetan divinities and saints were portrayed seated on maned lions or the skins of tigers. Fantastical hybrid animals were created by the artists working for the monasteries and temples that were part winged lion, part Tibetan mastiff that appear to be variations on the creatures found in the Chinese repertoire.
The Tibetan mastiff is an ancient breed of dog bred to resemble the Himalayan snow lion regarded as a powerful and almost mythical being. The mastiff still exists in Tibet and is used as a guardian of flocks, monasteries and temples. Intelligent and as tenacious as it is ferocious it can confront predators the size of wolves and leopards, often sleeping during the day in order to be more active, alert and aware at night. Marco Polo is said to have encountered large Tibetan dogs in his travels and described them as ‘tall as a donkey with a voice as powerful as that of a lion’.
The breed is now so popular in China that in March 2011 a red Tibetan mastiff was sold to a coal baron in Northern China for 10 million Yuan. 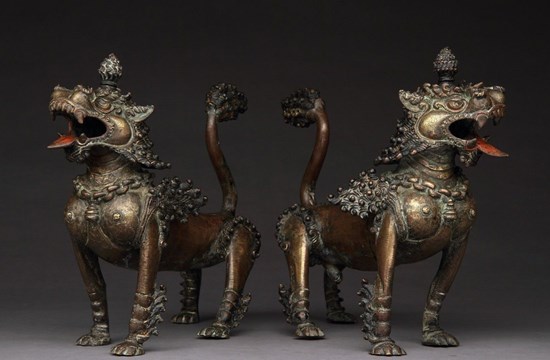 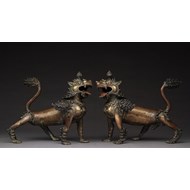 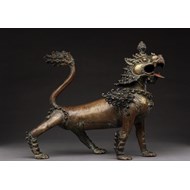 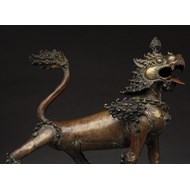 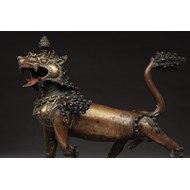 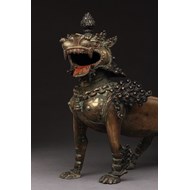 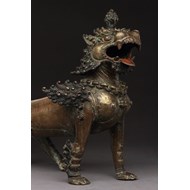 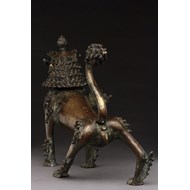