Caption Literature
An Interesting English Regency ‘After the Antique’ Glass Mosaic of ‘Winter’ from the Ancient Romano British Villa of Bignor Sussex Discovered in July 1811
An Old Ink Inscription to the Reverse Reading ‘Winter from the Mosaic Pavement at the Roman Villa at Bignor Sussex Presented to William Davey Dawes by W.Figg’
Circa 1811 – 1820
Size: 50cm high, 39cm wide – 19¾ ins high, 15¼ ins wide
Nearby to both Arundel and Petworth the 1st - 2nd century AD Romano-British villa at Bignor was a major archaeological find on English soil. The ‘Ganymede’ mosaic pavement was discovered on July 18th, 1811 when the Bury field was being ploughed. Mr John Hawkins of Bignor Park took the excavation in hand and placed it under the supervision of Samuel Lysons, the leading antiquary of the day. Hawkins assisted by a farmer, Mr Tupper, the owner of the field, did nearly all the digging which lasted for eight years. The size and extent of the Villa together with the quality of the mosaic pavements must have been astonishing. The seven fine mosaic pavements found at Bignor Park rank in design and execution with the best found elsewhere in Britain, i.e. London, Silchester, Woodchester and Cirencester.
It is clear that in the middle of the 4th century AD the villa was the home of a very prosperous merchant or dignitary who was able to provide himself with one of the largest country houses in Roman Britain and to decorate it with some of the costliest and finest mosaics in the province. In a room over 40 feet long was discovered a large mosaic pavement depicting the four seasons most of which had been destroyed by ash trees growing over it in the 18th century. The chief remaining object of interest was the head of ‘Winter’, in the appropriate North east corner, in an octagon of intersecting squares. The four seasons was a popular subject with the Roman designers and in the Conservatori Museum in Rome there is another large ancient pavement with a figure of ‘Winter’ that closely resembles the one at Bignor.
The powerfully drawn head and shoulders of the Bignor figure are covered with a British Celtic hooded cloak well known in the 3rd century AD throughout the Roman Empire for its thickness and warmth. Mentioned in Diocletian’s edict of prices (AD301) it commanded a higher price than any other similar garment. The figure holds a bare bough over his left shoulder and the cold effect has been skilfully obtained by the use of the black, brown and blue grey tesserae of the figure on the white background. The decorative effect of this carefully constructed Regency glass replica is as striking and great as that of the original ancient mosaic. 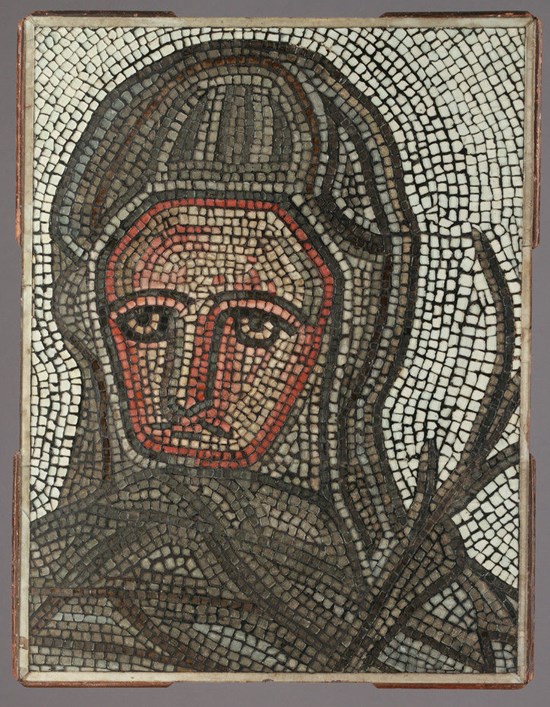 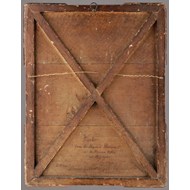 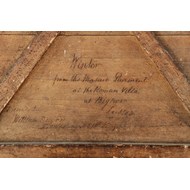