Caption Literature
A Taxidermy Specimen of a Large African Spurred Tortoise ‘Geochelone Sulcata’
19th Century
Size: 27cm high, 52.5cm long, 33.5cm wide – 10¾ ins high, 20¾ ins long, 13¼ ins wide
C.I.T.E.S documentation available
The African spurred tortoise is the largest mainland tortoise species and can be identified by its typical wide honey-coloured carapace with well-defined growth annuli on the scutes, and by its head and limbs thickly covered in scales. The species derives its name from the presence of two or three strong spurs on each side of the tail. It is an arid country species found right across the southern fringes of the Sahara and uses its sandy colouration as camouflage. Much of its habitat is so dry that it may not have access to standing water for years so it avoids excessive moisture loss by having an impermeable skin and by digging shallow burrows in the ground, sometimes sloping down to a depth of 30 inches. In captivity they have been known to live upwards of 50 years, but will drink water far more frequently and in greater quantities than it would ever have access to in the wild. 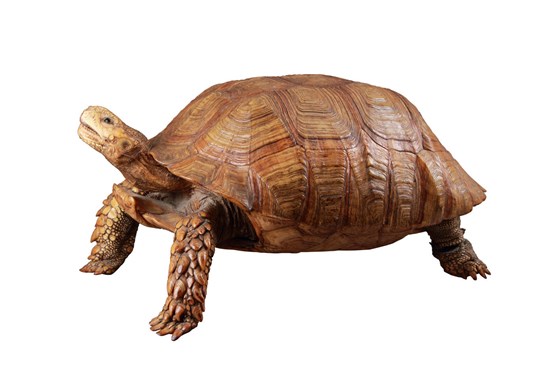 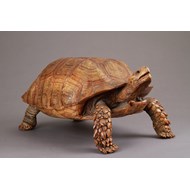 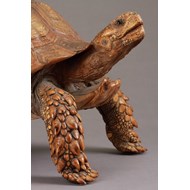