Caption Literature Exhibition
A Rare Ancient Northern British Celtic Gneiss Stone Female Figure of a Goddess, perhaps Brigantia
The large head with characteristically Celtic oval eyes an upturned slit mouth a crown of hair the rudimentary body with small arms and tiny hands gesturing towards her abdomen
2nd - 3rd Century AD
Size: 64cm high, 19.5cm wide, 12cm deep – 25¼ ins high, 7¾ ins wide, 4¾ ins deep
See: Finch & Co catalogue no. 13, item no. 124, for an Ancient Northern British Celtic Stone Head
cf: A Celtic female head of similar form found in Dumfries said to represent a local goddess. Illustrated in Toynbee, 1952 J.R.S. XLII pg 63-5
Gneiss, from the German word meaning ‘eyes’, is a foliated metamorphic rock in which the coarse quartz or feldspar mineral grains have been arranged into a banded structure. Most of the Outer Hebrides in Scotland has bedrock formed of Lewisian Gneiss and the prehistoric stone circle at Callanish is constructed of it.
The Celtic Goddess was at once mother, warrior, virgin, hag, conveyor of fertility and of strong sexual appetite which led her to seek mates amongst both mankind and the Gods, giver of prosperity to the land and protectress of the flocks and herds. She was more static and archaic than the male gods and so remained tied locally to the land for which she was responsible and whose striking natural features seemed to her worshippers to be manifestations of her power and personality. When they were no longer venerated as deities they became converted into local nymphs, guardians of pools and wells, or great supernatural hags haunting mountain passes or driving their deer over hills, conferring benefits or evils on humanity as they saw fit.
When Christianity eventually displaced the old Celtic region many of the Celtic pagan gods and goddesses remained traceable in the characters of the local saints and in the spirits of individual localities.
Sold - similar Celtic heads / artifacts required - please contact with details 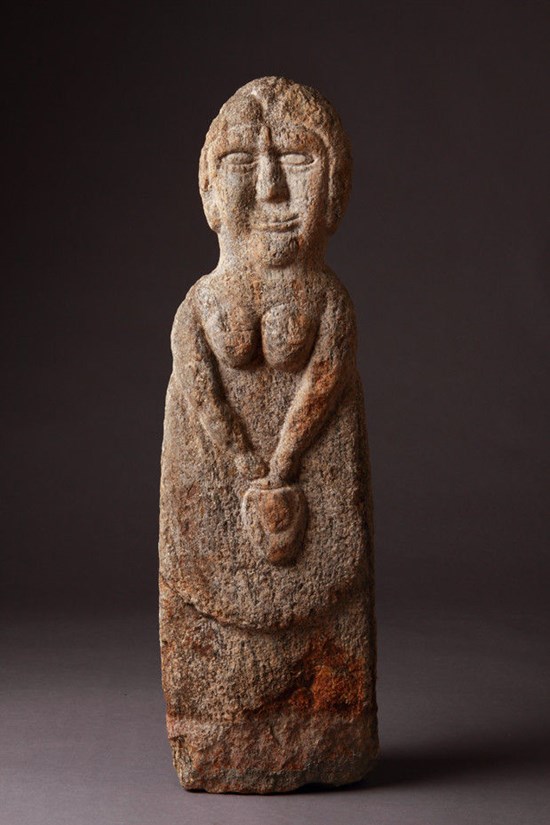 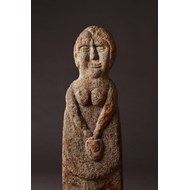 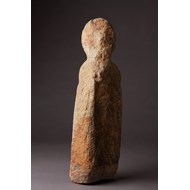