Taxidermy Head of a Coursing Lurcher

Caption Literature
A Victorian Taxidermy Head of a Coursing Lurcher Mounted on an Oak Belt Shaped Shield Wearing a Brass Mounted Collar Inscribed with the Dog’s name ‘The Carabiniers’ and that of the owner ‘A Sprot Esq’
Circa 1860-1880
Size: 37cm long – 14½ ins long (max) 20cm high – 8 ins high (wood plaque)
The name Lurcher is said to come from the Middle English word ‘Lorchen’, to lurk, or from the Romany ‘Lur’ meaning thief, and ‘Cur’ meaning a mixed dog breed.
In the 14th and 15th century English and Scottish governments banned commoners from owning sight hounds such as Irish and Scottish deerhounds and greyhounds, and so lurchers were bred to avoid these restrictions. The aim of the cross was to breed an intelligent canny dog with enough speed suitable for poaching small game. Lurchers can be as big as a deerhound or as small as a whippet dependent on the cross.
Coursing developed over time into a sport for all. At the big 19th century meetings in Northumberland most of the runners were owned by coalminers whose dogs ran with the same chance of winning as those of the Duke of Leeds. The Waterloo Cup, the famous classic coursing event, was first run at Altcar near Liverpool in 1836. It became a national event attracting huge crowds of up to 75,000 people a day. The winning dogs such as Master M’grath and Fullerton became national heroes with the thrice winner Master M’grath being presented by Royal command to Queen Victoria.

Taxidermy Head of a Coursing Lurcher 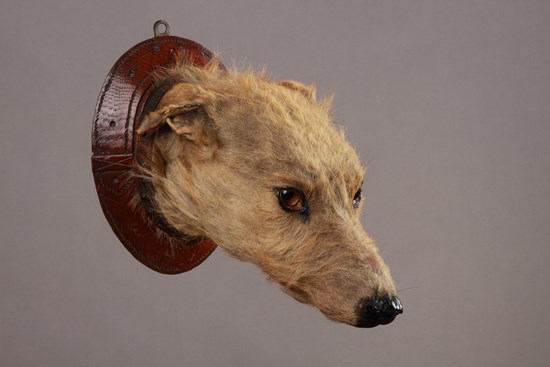 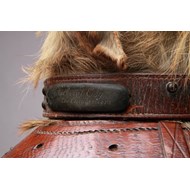 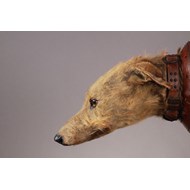 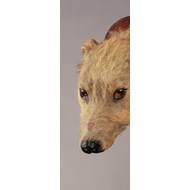