Caption Literature Exhibition
A Rare English Gold and Tortoiseshell Snuff Box Mounted With a Fine Carved Ivory Micro Miniature Depicting Nelson’s Historic Battle Formation of a Double Line of Frigates upon a Blue Stained Ivory Sea at Trafalgar
By G Stephany and J Dresch
With Chester Hallmark
Contained in contemporary gilt tooled red Morocco box
Circa 1805 – 10
Size: Box: 2.5cm high, 8.5cm wide, 4cm deep – 1 ins high, 3¼ ins wide, 1½ ins deep
Case: 3cm high, 9.5cm wide, 5cm deep – 1¼ ins high, 3¾ ins wide, 2 ins deep
Nelson’s highly original tactical decision at Trafalgar to not form the single line ahead for battle, which had hitherto been sacrosanct and strictly enjoined by Naval Fighting instructions, but to attack in the order of sailing in two columns in order to overwhelm the rear half of the enemy’s line was to change the course of naval warfare. His decision to delegate the direction of one line to the second in command was also novel, as was his releasing of his Captains from too rigid a conformity with the standing instructions: ‘No Captain can do very wrong if he places his ship alongside that of an enemy’.
Nelson was defying conventional naval warfare by ordering his Captains to split the British fleet and spear the enemy's line to create a ‘pell mell battle’. Prior to Nelson’s initiative which was forever after known as ‘The Nelson Touch’, two opposing fleets would meet and fight in a formal line of battle which rarely achieved a decisive result. Using innovative direct tactics Nelson aimed to cause a míªlée in which the superior experience of the British sailors who spent all their time at sea, would be conclusive.
Stephany & Dresch worked in London and Bath in the late 18th and early 19th century. Their work became so popular amongst fashionable society that they were granted the title of ‘sculptors in miniature on ivory to their Majesties’ by George III. Their carved ivory scenes were regarded as ‘marvels’ of micro-technique, and the tiny, but accurate naturalistic construction made their miniatures unable to ever be replicated.
cf: A very similar box showing the distinctive British fleet dispositions under Nelson’s tactics at Trafalgar exists in the private collection of Lloyds of London. It is also gold mounted, but made of wood reputedly from a splinter of the ‘Victory’. It is said to have belonged to Lady Emma Hamilton and was presented to Lloyds by H E Fulford in 1939 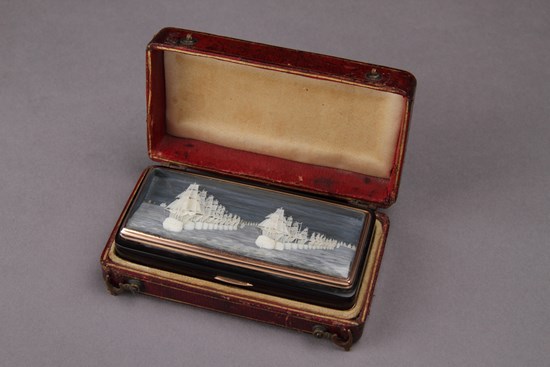 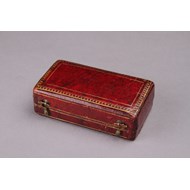 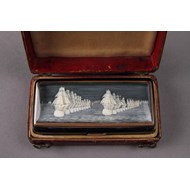 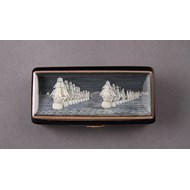 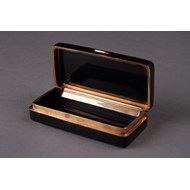 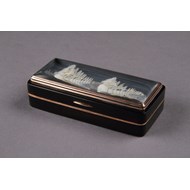 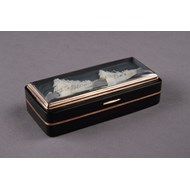 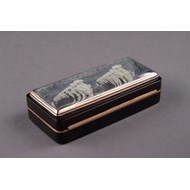 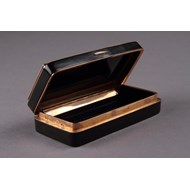 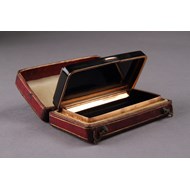 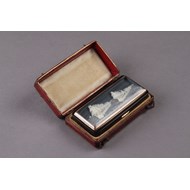 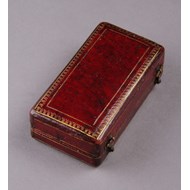