Caption Literature
A Rare and Superb Set of South German Presentation Cutlery Comprising Six Pairs of Carved Boxwood Eating Knives and Forks variously depicting Adam and Eve Faith and Hope Bound Slaves emblematic of Asia and Africa all standing beneath leafy fronds
The knives with iron scimitar blades above silver ferrules the forks with two iron prongs and silver ferrules
Mid 17th Century
Size: approx: 25cm long – 9¾ ins long (knives) 21.5cm long – 8½ ins long (forks)
The exceptional quality, naturalism and accuracy of these carved boxwood figures suggest that the artist was working from contemporary engravings. Carefully carved in the round and rich in detail the set was most probably made as a prestigious wedding present. From the 16th century onwards husbands often made gifts of cutlery to their newly wed brides. However during the 16th century the gift would have consisted solely of knives as the fork only came into common use during the course of the 17th century. It took time to gain acceptance as the fork had once been thought of as an attribute of the Devil, and in the Middle Ages held to be a symbol of vanity. The knife however was indispensable at table with each household possessing at least one, which was often used by several people during the course of a meal. 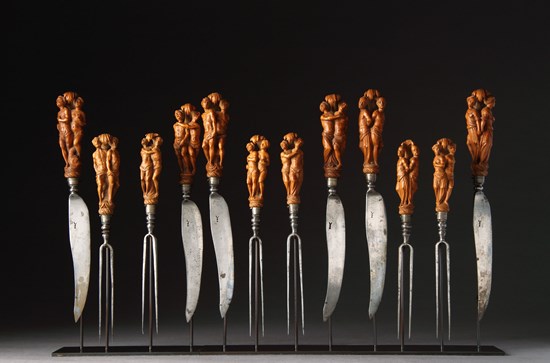 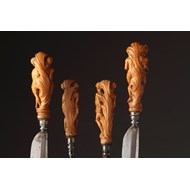 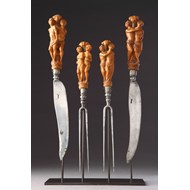 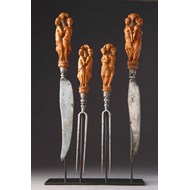 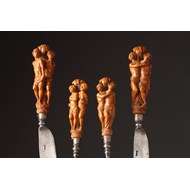 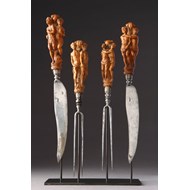 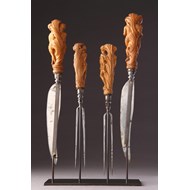 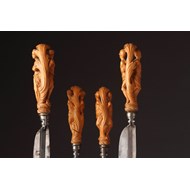 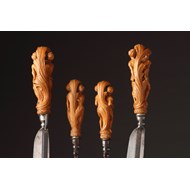 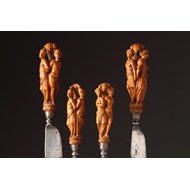 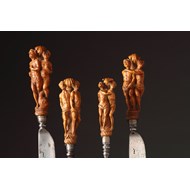