Caption Literature
A Set of Thirty Four Company School Miniature Gouaches on Ivory Depicting the Palaces Temples and Mausoleums of Mughal India
Laid on an old paper panel with ink inscriptions locating and naming various monuments
Circa 1860
Size: 19.5cm high, 21cm wide – 7¾ ins high, 8¼ ins wide (card)
The exoticism of Indian Mughal architecture and the idea of the picturesque became a British obsession in the 19th century. Influenced by the paintings of ruins and monuments by Thomas Daniell and William Hodges, an Indian vogue in Regency architecture arose resulting in country houses such as Sezincote in Gloucestershire built in 1805 and culminating in the Royal Pavilion at Brighton. In both, the picturesque and the exotic were complementary, but the treatment of real Moghul Indian architecture with a picturesque painterly method tended to temper, rather than exaggerate their exoticism making them conform to European artistic values and become part of the English landscape tradition. 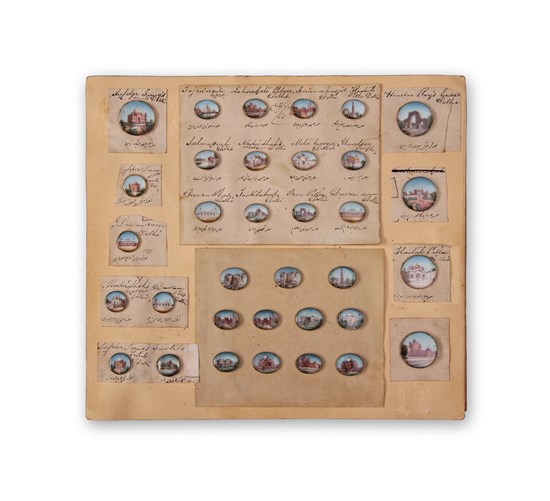