Caption Literature
A Very Unusual Marine Carved Tortoiseshell Portrait of Steam Yacht Sailing on an Etched Blond Horn Sea, Set behind Glass in a Tortoiseshell Frame
Circa 1870-80
Size: 12.5cm high, 17cm wide, 1.5cm deep – 5 ins high, 6¾ ins wide, ½ ins deep
In the 1870’s with the introduction of the compound engine and its greatly increased economy in coal and water consumption, the paddle steamer was gradually swept from the high seas. Coaling stations had begun to become established worldwide to enable steamers to take on coal for any and every voyage. The Suez and Panama canals were unsuitable for the passage of sailing ships and so by the 1880’s steamers had largely taken over on the Australian and other main lines of sea communication. The days of the great Liverpool clipper ships and the little Blackwall frigates were finished. 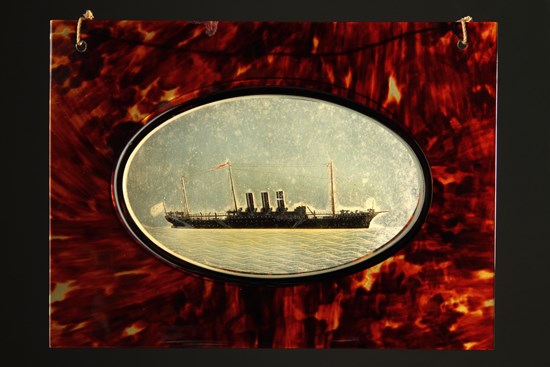