Caption Literature
A Commemorative Turned Lignum Vitae Wood Table Snuff Box, the Lid with a Gold Mount Engraved with a Horse and Inscribed ‘This box is part made from the powder mills which was blown up at Waltham Abbey 13 Apr’ 1843 Wm Marsom Enfield Highway’
Old repaired crack to the lid
Circa 1845-50
Size: 2.5cm high, 14.5cm dia. – 1 ins high, 5¾ ins dia.
The Royal Gunpowder Mills at Waltham Abbey was one of 3 sites that existed in Great Britain and was in operation for over 300 years. Originally it was a fulling mill for cloth set up by the monks of the Abbey on the Millhead stream which was an engineered water course tapping the waters of the River Lea. In the early17th century, it became a vegetable oil mill, but was soon converted to gunpowder production, and by the end of the century the enterprise had become so successful that additional facilities were built and the mills expanded upstream. In the first half of the 18th century the mills became one of the first examples of an industrialised factory system being described in 1735 by local historian Thomas Fuller as ‘the largest and compleatest works in Great Britain’.
In the 1780’s it was advocated that the mills be purchased by the crown to ensure secure supplies and the quality and economy of the gunpowder. In October 1787 the mills were purchased for £10,000 from a Mr JohnWalton and a 204 year period of crown ownership began.
Under the new regime, and with new direction, manufacture moved from what had been once regarded as a black art to an advanced technology. Thus they were able to respond to the massive increases in demand during the French Revolution and the Napoleonic Wars culminating in the victory at Waterloo in 1815. In the years following, although there was a decline in staffing, there was a steady advance in machinery and process development and in research as private industry in construction, mining, quarrying, tunnelling and railway building all required large amounts of gunpowder.
On April 13th 1843 there was a very violent and huge explosion on the site in which ten people were killed. The force from the explosion was so great that timber from the mills was found over a mile away at Enfield Lock, which is probably where the wood for this snuff box was found.
Just over 100 years later on 28th July 1945 the Royal Gunpowder Mills were closed. 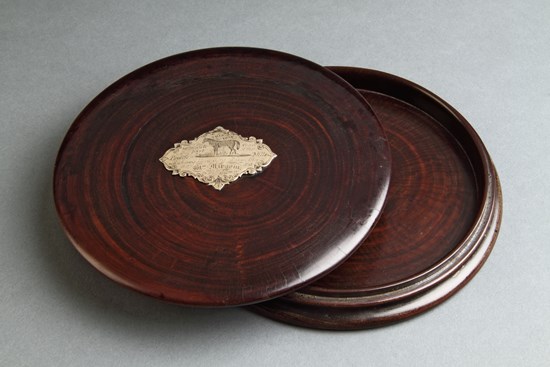 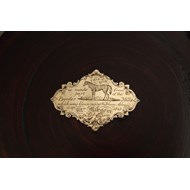