Caption Literature
A Fine French Dieppe Ivory Plaque Carved in High Relief With a Dramatic and Noble Stag Hunting Scene
When lit from behind the extensive detail can be viewed in three dimensions. The ivory thinly carved to the top to create the impression of a forest. After a Renaissance tapestry
Mid 19th Century
Size: 11.5cm high, 18cm wide, 1cm deep – 4½ ins high, 7 ins wide, ¼ ins deep
In the 19th century there were more ivory carvers at work in France than in any other European country, with the most notable centres of production being Paris and Dieppe. The craft of ivory carving in France was recognised as one of importance commercially as well as artistically. ‘Tabletterie’ were classified as ‘he who makes and sells chessboards, chessmen, draughts, billiard balls and other works of ivory... a toy-man or woman, one that keeps a toy shop’. A ‘toyshop’ meant a shop that sold expensive luxury items for adults, not children. The ‘ivoirier’ also made statues, crucifixes, knife and door handles, combs, fans, sewing accessories, holy water stoups, narrative plaques such as this, and portrait plaques. All of these objects were successfully sold by the ivory carver in his own shop, in Dieppe often located in the Grand Rue, without the need for middlemen who had helped keep the English ivory craftsmen down. 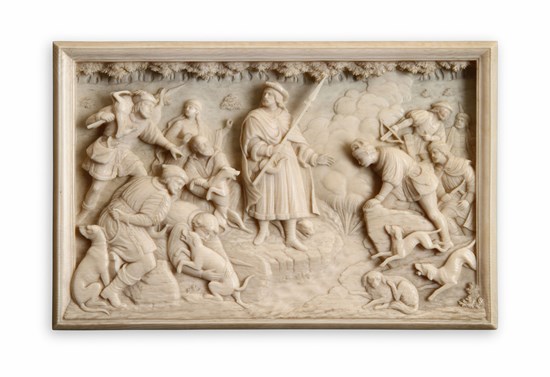 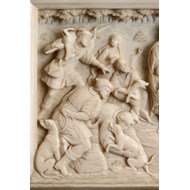 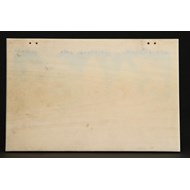 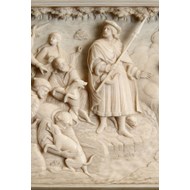 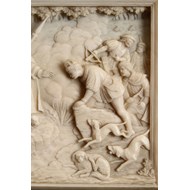