Caption Literature
An Indian Topographical Watercolour on Paper of a View of Bombay Harbour
Painted from a ridge behind Sewri showing Trombay Island and Thana Creek with local Ghats sailing across a calm sea
Circa 1840-60
Size: 34cm high, 50cm wide – 13¼ ins high, 19¾ ins wide
Bombay has for long been India’s largest port and for much of the 19th and early 20th century people from Britain and Europe would sail into Bombay Harbour to enter India; ‘the land of spices’. However, 250 years ago nothing, but a range of local craft would sail past the Islands and fishing hamlets of Bombay, most of them without stopping. It was not until the East India Company gained firm control of the Bombay Islands that the landscape and seascape around the harbour began to change. The Portuguese had been generally indifferent to the potential of the harbour, even though in 1662 in a letter to his King the Portuguese Governor had noted Bombay to be the ‘best port your Majesty possesses in India’. In the same year, under the terms of the marriage treaty between Catherine of Braganza and Charles II, Bombay passed to the English crown. In 1668, seeking a safe port, the East India Company began to rent the sprawling harbour of Bombay for a meagre £10 in gold per year. 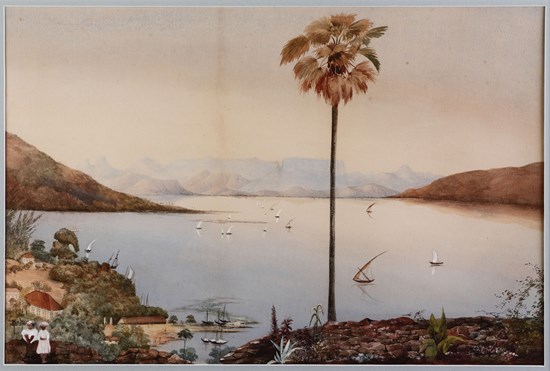