Caption Literature
A Fine Indian Lucknow Carved Ivory Figure of a Snake Charmer ‘Sapera’
With ivory, horn and sandalwood snakes surrounded by the various tools of his trade, and a scorpion, on a raised arcaded platform
19th Century
Size: 17cm high, 14cm deep, 11cm wide – 6¾ ins high, 5½ ins deep, 4¼ ins wide
cf: A very similar figure in Simon Ray’s catalogue, November 2008, No. 46
The snake charmer is shown holding a small ivory writhing snake in one hand and the flute or ‘pungi’ with which he mesmerises the snake in his other hand. The ‘pungi’ is a type of folk clarinet that originated in the Middle East and is usually made from a dried bottle gourd or coconut. It has two reeds or bamboo tubes, one for the melody and one for the drone, which are played by a studied method of circular breathing, so that the haunting and hypnotising melodies are played without a pause.
The snake charmer has learnt to read the movements of the snake and can tell when it will strike. Snakes are essentially timid reptiles who prefer to scare predators rather than fight them, and so when released from the dark interior of its basket the cobra will stand upright, extend its hood and sway to and fro appearing to dance to the music being played by his master. The snake, however, cannot hear the tune and is only reacting to the movement of the flute and the vibrations from the sapera’s tapping feet.
Traditionally, snake charmers were healers who could treat snakebites and came from Bengal. During the early 19th century the centre of their trade moved to a small village called Salenagar near to the ancient city of Lucknow. Made for the East India Company export trade by the skilled ivory carvers of Lucknow, these models provided an insight into the daily life of the Indian subcontinent and were exotic souvenirs of a far off and different culture. 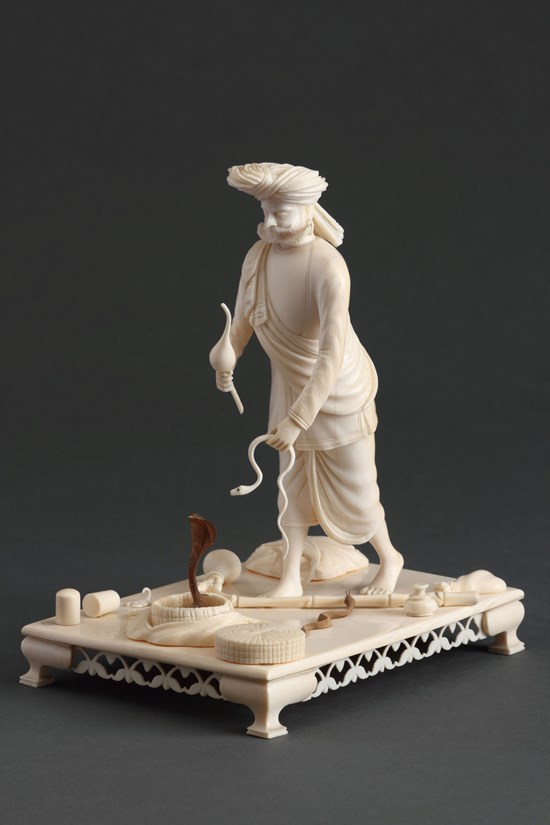 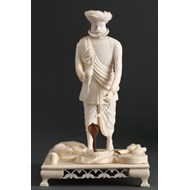 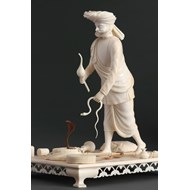 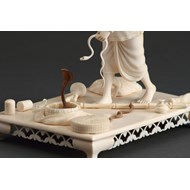 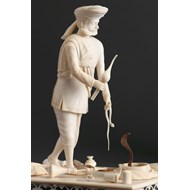 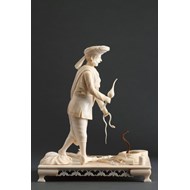