Caption Literature
A Rare Carved Wood Nepalese Dance Mask of the Hindu Divinity Bhairava ‘The Terrifying One’
The mouth worn smooth from offerings once placed into it
Katmandu Valley. Old dark smooth patina
17th Century
Size: 33cm high, 17cm wide, 10cm deep – 13ins high, 6¼ ins wide, 4 ins deep
Bhairava is known as the ferocious divinity: the wide-open staring eyes demonstrate ‘the terrifying one’ and his wild and uncontrollable nature. His connections to Shiva are shown in the serpent imagery of his earrings, necklace and headdress, by the upstanding ringlets of matted hair, the third eye set in his forehead, the crescent moon in his hair and in the skull imagery of the headdress.
He is especially popular as a divinity in Nepal and northern India where he is renowned for the beheading of a Brahmin. Not just an ordinary Brahmin, but the god Brahma himself. The legend is that Bhairava was generated miraculously from the anger experienced by Shiva as he was forced to listen to the vain boasting of Brahma. Immediately created Bhairava sprang forward and cut off one of the five heads of Brahma and ever since Brahma has been recognised by his four rather than five heads.
As penance for his crime Bhairava was condemned to endlessly wander with the fifth head of Brahma stuck to the palm of his hand. Only when he reached Benares, the great confessional where all sins are washed away, did the head of Brahma fall away freeing him of his crime. Frequently portrayed as a young ascetic with wild hair accompanied by his dog ‘Vahana’, he is known as an excitable, dangerous and ambivalent divinity whose emblem is the human skull or ‘Kapala’. An extreme Shaiva sect known as the ‘Kapalika’ emulate his wandering penance, using a human skull as a begging bowl for alms. They deliberately indulge in contrary behaviour to demonstrate their passage beyond the difference of opposites. Like Bhairava they believe they will reach liberation through the grace of Shiva. 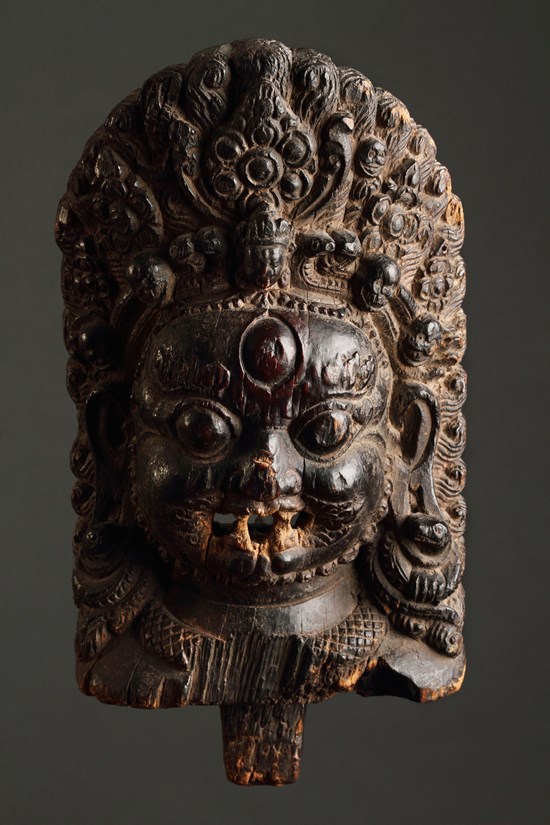 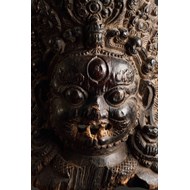 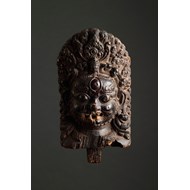 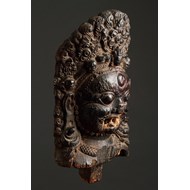