Caption Literature
A Rare Finely Painted Chinese Export Reverse Glass Painting
Depicting dead game hanging from a peg, the fish scales individually silvered to create iridescence, the feathered detail of the duck and pheasant clearly and minutely worked
Fine condition in original Chinese gilt wood frame
18th Century
Size: 40 cm high, 30.5 cm wide – 15¾ ins high, 12 ins wide
In 18th and early 19th century Canton a thriving export market existed for China trade paintings. Western subjects were copied from prints supplied by European traders, but because of their age and rarity today fine China trade paintings on glass merit artistic recognition.
C. Toogood Downing writing in the early 19th century described the studios of the Chinese artists working for the export trade on China Street in Canton.... ‘It may be mentioned in this place that the Chinese are very famous for their paintings on glass.
This is an art which is almost lost in Europe, but is very successfully practised in this country. This style of painting suits the Chinese artists very well as it exhibits the splendour of their colours. Painted glass must be very extensively used in China for ornamenting the houses etc., as even the suburbs without the walls of Canton, great numbers of shops for the sale of this single article are collected together, so that the foreigners have given the locality the name of Painter Street. Our Jack-tars are much caught by this showy material and generally carry away some trumpery specimens to dazzle the eye of the fair dame of Shadwell and Blackwall’. C.Toogood Downing ‘The Fan-Qui in China in 1836-7’ Vol II, pg; 90-117, 1838. 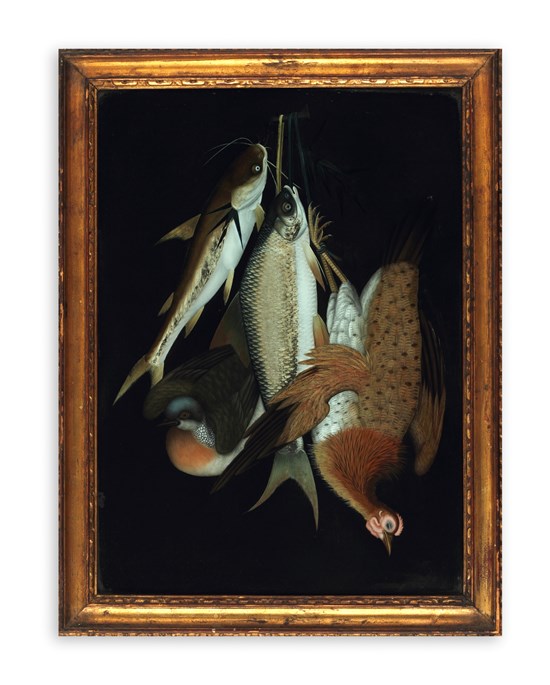