Caption Literature
The Very Rare Partially Complete Skeleton of an Extinct New Zealand Moa 'Megalapteryx Didinus'
Excavated and exported from New Zealand in the 19th Century
Size: 91cm high, 36 ins high
The Moas of New Zealand are among the best known of all extinct birds and like the famous Dodo they were flightless bipeds without even the vestige of a wing. There were several different kinds, probably around 13 species, all living in New Zealand ranging from a gigantic four metres tall to the size of a large turkey. The lesser Megalapteryx was around the size of a small Shetland pony and all of them resembled the ostrich in form and shape.
Some were still living when Tasman first sighted the Islands in 1642 and certainly the historical tribes of the Maori knew the Moa and prized it as a food source, but it is thought that they became extinct some 300 years ago. Although in 1844, Robert Fitzroy, once Captain of the Beagle and then Governor of New Zealand, interviewed an ancient Maori named Haumatangi who said that as a small boy he had seen Captain Cook and two years earlier, the trapping of a Moa.
The first excavated extinct Moa bone arrived in Britain in 1839 and was examined by the famous Victorian comparative anatomist Richard Owen. In 1878 the dried head, neck and legs, with some skin ligaments and feathers attached of a Megalapteryx Didinus, was found in a cave near Lake Wakatipu. These were also sent to Britain and purchased by the British Museum where after research they showed that the Moa was feathered from the base of the beak to the toes. Many Moa bones and several partially complete skeletons now exist in some of the world’s major museums, but they are rarely found in private collections and this excellent specimen is possibly unique on the market. 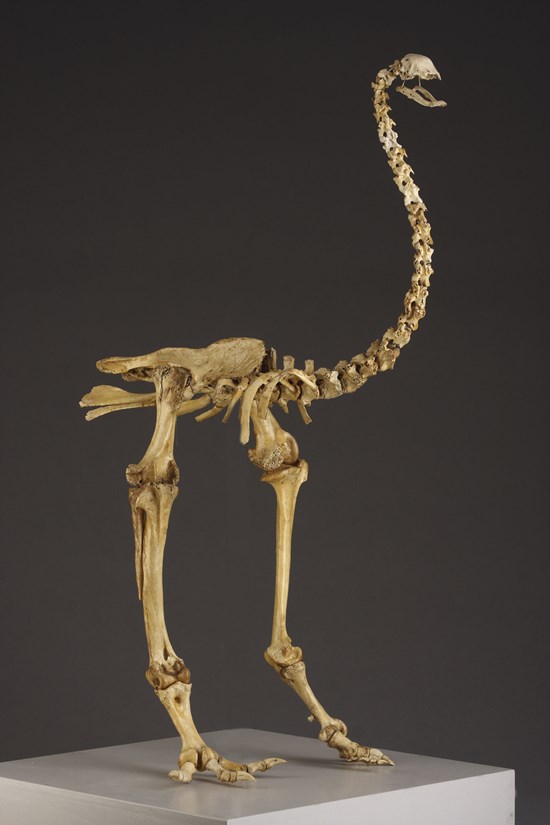