Caption Literature
A Fine 'Indo-Portuguese' Table Cabinet of Eight Drawers
Made from teak overlaid with tortoiseshell and inlaid with ivory, gilt bronze side handles and mounts
Probably made in Gujarat or Sind in Mughal India
Good original condition
17th Century
Size: 23.5cm high, 26cm deep, 39.5cm wide
9¼ ins high, 10¼ ins deep, 15½ ins wide
It has for long been supposed that these table cabinets were made in 17th century Portuguese Goa in South India. However, it is now proposed that they were in fact made in Gujarat and Sind in Mughal India as contemporary references to tortoiseshell caskets and cabinets have been found of them being produced, in this region.
They were used for jewellery: in a 17th century miniature now in the Chester Beatty library 'The Portrait of Rustam Khan' an undecorated cabinet is depicted in the upper border with two servant figures placing different jewels in each drawer. This also shows that these cabinets were made for a local market and not just produced on commission to serve European demand. 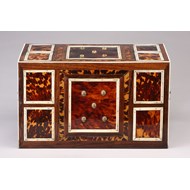 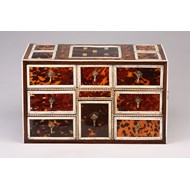 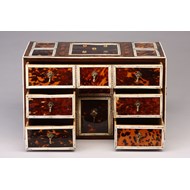 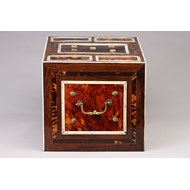 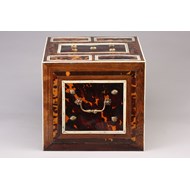 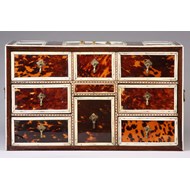 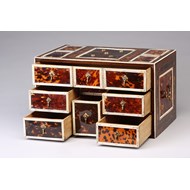 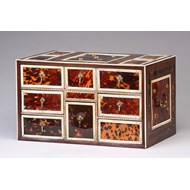 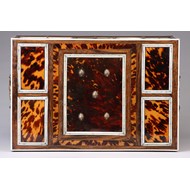