Caption Literature
A Fine Medieval Northern French Gothic Deeply Carved Ivory Diptych Panel Depicting The Virgin in Glory
The Virgin holds the Christ Child in the curve of her left arm a stem of flowers in her right hand the candle bearing angels set against the frame their eyes rendered with bulging lids. The figures placed beneath a single trefoil arch supported by corbels inset with tracery decorated above with leafy crockets and a central finial. Two hinge marks to the right edge indicate this was the left panel of a diptych.
Old labels to the reverse reading ‘Carved in Narwhal Horn’ and ‘Part of a Diptych Late 14th Century school of Soissons bought about 1908 for 5/- P8 GS’ and ‘1952 Identified by Mr. Morton Lee who has a collection’
Circa 1350-80
Size: 10cm high, 6cm wide, 1cm deep – 4 ins high, 2¼ ins wide, â…“ ins deep
The Panel of the Virgin and Child with angels is often found together with a panel of Christ on the cross as a diptych. During the late 14th Century there was much interest in Mary as a human image in her own right and these opposing ivory panels give the Virgin a pictorial status virtually equal to that of Christ. The idea of the Virgin’s humanity and accessibility is reflected in these 14th century images, which were intended as aids to prayer.
During this period these devotional carvings together with the cult of the Virgin became very popular and there was not a single country in Europe that was not creating ivory sculpture, or a Royal treasury or a cathedral sacristy without its supply of fashionable ivory products. 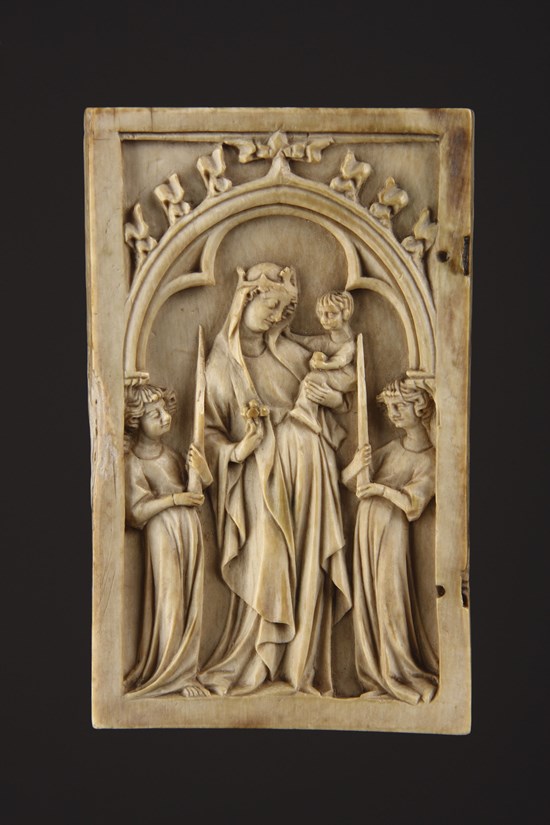 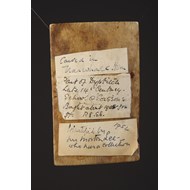