Caption Literature
A Carbon Art Formula One Automotive Inspired Sculpture of a ‘Racing Piranha’
By Alastair Gibson. A limited edition of 10
First commissioned by Rubens Barrichello in 2007
The special motor racing components and the materials used are all from raced B.A.R and Honda Grand Prix cars, (a list of the parts used is available), which Alastair has collected
Size: 34cm high – 13¼ ins high (including stand)
Drawing similarities between modern Grand Prix cars and game fish Alastair has created a series of sculptures using F1 car parts and technology to show these unique fish in a different form. Born in Johannesburg South Africa in 1962 Alastair went on to study balance engineering. Having inherited his father’s love of restoring motor vehicles he bought and rebuilt a Formula Ford car, racing it for four seasons before realising he preferred preparing the car to racing itself. So he sold it and worked his way through Europe to England where he got into Formula Ford as a mechanic. Eventually he became chief mechanic at the Honda F1 racing team and after 10 years in the pits of the race circuits around the world, working with many of the top F1 racing drivers including Jenson Button, Jacques Villeneuve, Jean Alesi and Kenny Brack, Alastair retired in Spring 2008, although he was retained as a consultant to the team, to concentrate on his sculpture.
Gaining inspiration from the glamorous sport of F1 and incorporating motor racings hi-tech and innovative materials into his designs Alastair marries his early childhood passion for marine life with his creative engineering talents to produce his unique carbon fibre sculptures. These were first shown in 2002 at a Lucky Strike sponsored Tribe art exhibition at the Boiler House in Brick Lane, London which went onto tour seven different countries.
Alastair has recently made a sculpture of a Koi carp for Ross Brawn and is working on several commissions for Hammerhead and Mako sharks. As Alastair says, ‘A shark is a Grand Prix car in nature’. 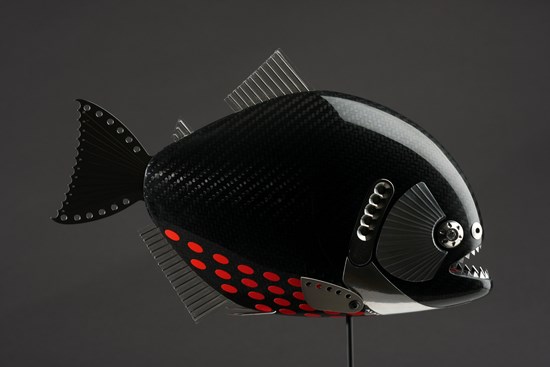 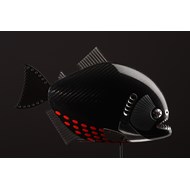 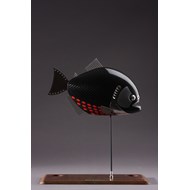