Caption Literature
Two Unusual English Enamel Oval Plaques Probably South Staffordshire
One depicting a soldier standing next to a table of movable metal type holding a scroll inscribed ‘Printing discover’d Anno 1441’
The other depicting a bearded Jewish high priest holding a swaying and smoking incense burner wearing a Torah breastplate and a Streiml hat with the date 1778
Late 18th Century
Size: a: 9.5cm high, 5.5cm wide – 3¾ ins high, 2¼ ins wide
b: 8cm high, 6cm wide – 3 ins high, 2½ ins wide
In the 18th century technological innovations made the production methods of enameling simpler and consequently less expensive and so enameled wares were brought to a much wider audience. All of the myriad objects embellished by craftsmen with the durability of enamel in a dazzling array of colours had both their beauty and ultimately their value enhanced.
The first plaque relates to Johann Guttenburg (1400 – 1468) who was a German printer the inventor of printing from movable metal type based on the Chinese wood block type method. Guttenburg began work on the process in the 1430’s and in 1440 set up a printing business in Mainz with Johann Fust as a backer. Printing began in 1441 and by 1455 he had produced the first printed bible now known as the ‘Guttenburg Bible’. Fust seized the press for nonpayment of the loan, but Guttenburg is believed to have gone on to print the Mazarin and Bamberg bibles.
The second plaque shows a Jewish High Priest in his fine celebratory robes. According to Jewish law only the high priest could pronounce the Tetragramm, that is the four letters YHWH or JHWH of the Hebrew name for God, once a year on the Day of Atonement. Among very orthodox Jews it is even customary to avoid writing the name of God in the vernacular and G-d is preferred. 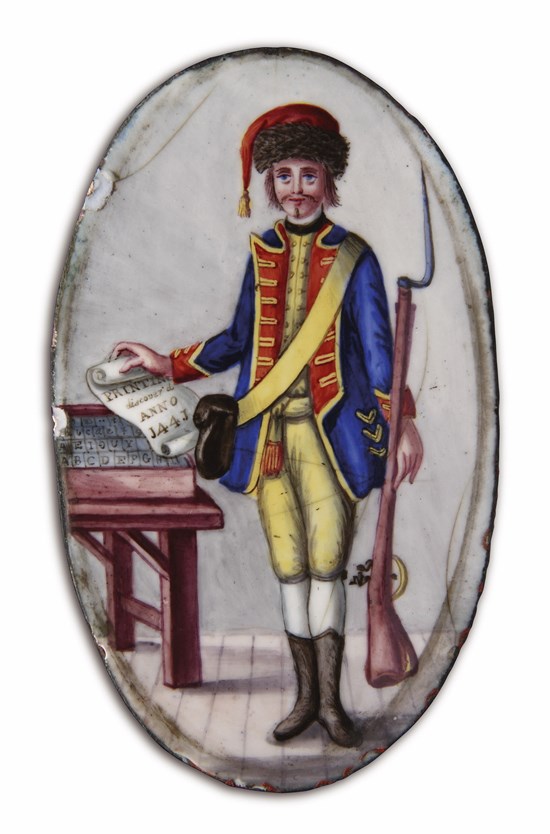 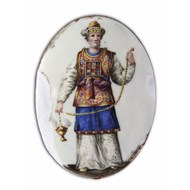