Caption Literature Exhibition
A Rare and Unusual Ancient Roman Physician’s Porphyry Pill or Salve Stone
1st - 2nd Century AD
Size: 5.5cm dia. – 2¼ ins dia.
Drugs made up by the physician of ancient Rome were frequently made of expensive ingredients and their imperial patients expected a luxury service from their highly paid personal doctor.
Under Nero the medical profession became organised into two distinguished ranks: the ‘archiatri palatini’ body physicians for the emperors, and the ‘archiatri populares’ to serve the general populations. The former were highly regarded court officials with the title of ‘spectabiles’.
Medical men were divided into physicians, surgeons and oculists. Evidence has also been found of dentists, specialists for diseases of the ear, lady physicians for female diseases, midwives and assistants whose main task was to rub patients with medicinal ointment. In Pompeii two chemist shops were found and solid medical substances laid out on stones and slabs, and dried up liquids in glasses were found together with a surgical apparatus of bronze.
Frequent diseases of the eye necessitated a separate class of oculists and the names of the Empress Livia’s are known and were found in her funerary vault. Small vases, which were once thought to be children’s toys, were used as receptacles for drops for the eyes and small slabs were used for salves. In Pompeii one of these shows the inscription ‘Lycium Iasonis’ the prescription of the Greek oculist Iason.
We are always interested in purchasing items of Porphyry from raw fragments to worked examples 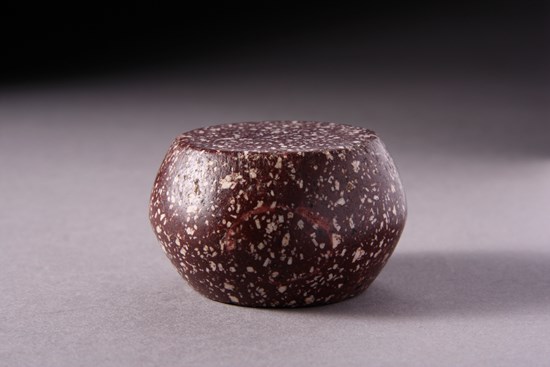