Caption Literature
A Fine Carved White Marble Memorial Plaque of Lord Byron 1788 – 1824
Second quarter of the 19th Century
Size: 76.5cm high, 56cm wide – 30 ins high, 22 ins wide
Byron is considered by many to have been the first modern-style celebrity. Famously described by Lady Caroline Lamb as ‘mad, bad and dangerous to know’ Lord George Gordon Byron later Noel, 6th Baron Byron, is regarded as one of the greatest of European poets whose legacy of inspiration in poetry, music, the novel, opera and painting has been immense.
Born with a clubfoot, which had a profound effect on his future temperament, by the age of ten, he had inherited the baronetcy and Newstead Abbey in Nottinghamshire. He was educated at Harrow and Trinity College, Cambridge where he kept a bear as a pet in his rooms out of annoyance at the college rules that forbade pet dogs. He later suggested that the bear apply for a college fellowship.
Byron had a great fondness for animals notably for a Newfoundland dog he called Boatswain which when it contracted rabies Byron nursed without fear of being bitten or infected. Boatswain lies buried at Newstead Abbey and has a magnificent monument much larger than was later built for his master.
By 1807 Byron had published his first collection of poems ‘Hours of Idleness’. In 1809 he took his seat in the House of Lords and then spent two years touring Portugal, Spain, Malta and the Levant. He swam the Hellespont, wrote his famous lyric ‘Maid of Athens’ and became fired with the political ideal of freeing Greece from Turkish domination.
His first great literary triumph came with the publication of the first two canto’s of ‘Childe Harold’ in March 1812. He was lionised by aristocratic and literary London, survived a hectic love affair with Lady Caroline Lamb and became the constant companion of his half sister Augusta, who later gave birth to a daughter, Elizabeth Medora Leigh who is generally regarded as Byron’s. In 1815 he married Lady Caroline’s cousin Annabella Milbanke and had a daughter, Ada with her. By now his debts were accumulating and public horror at the rumours of his incest and homosexuality was rising. Annabella left Byron and a legal separation was arranged.
In 1816 he travelled to Geneva where the Shelleys and Claire Clairmont had rented a villa. After four months of writing including Canto III of ‘Childe Harold’ he left for Italy and his daughter by Claire, Allegra was born in January 1817 in England. While living a riotous life in Venice he completed ‘Manfred’ and travelling to Rome he passed Tasso’s cell which inspired his ‘Lament of Tasso’. In 1818 he sold Newstead Abbey and was at last free from financial worries. Back in Venice he met Teresa, Countess Guicciolito to whom he became deeply attached following her and her household to Ravenna where he wrote the ‘Prophecy of Dante’. In 1820 he became involved with the cause of the Italian patriots. In 1822 his daughter Allegra died leaving Byron distraught with grief. He left with the Countess and her family for Leghorn where Leigh Hunt joined them and with whom Byron co-operated on the production of the ‘Liberal’ magazine. In 1824 he arrived, after a series of mishaps and escapes, in Missolonghi where he formed the ‘Byron Brigade’ and gave large sums of money and great inspiration to the insurgent Greeks, but before he saw any serious military action he died of fever in April. It has been said that had Byron lived he might have been declared King of Greece. Revered even today as a national hero by the Greeks the name of Byron is still a popular boy’s name, and a suburb of Athens is called Vyronas in his honour.
Byron’s body was embalmed, but the Greeks wanted some part of their hero to stay with them, so his heart remained at Missolonghi, placed in an urn that was lost when the city was sacked. His other remains were sent to England for burial in Westminster Abbey. The Abbey refused to accept them on grounds of ‘questionable morality’. Huge crowds viewed his body as he lay in state for two days in London before being buried at the Church of St Mary Magdalene in Hucknall, Nottinghamshire. A marble slab given as a memorial by the King of Greece is laid directly above Byron’s tomb.
Byron’s friends raised one thousand pounds to commission Thorvaldsen to sculpt a statue of the poet. It was completed in 1834, but remained in storage for the next ten years as most British institutions, including the British Museum and the National Gallery, refused to have it installed. It was finally placed in the Library of Trinity College, Cambridge. It was not until 1969, 145 years after Byron’s death, that a memorial was erected to him in Poet’s Corner in Westminster Abbey. 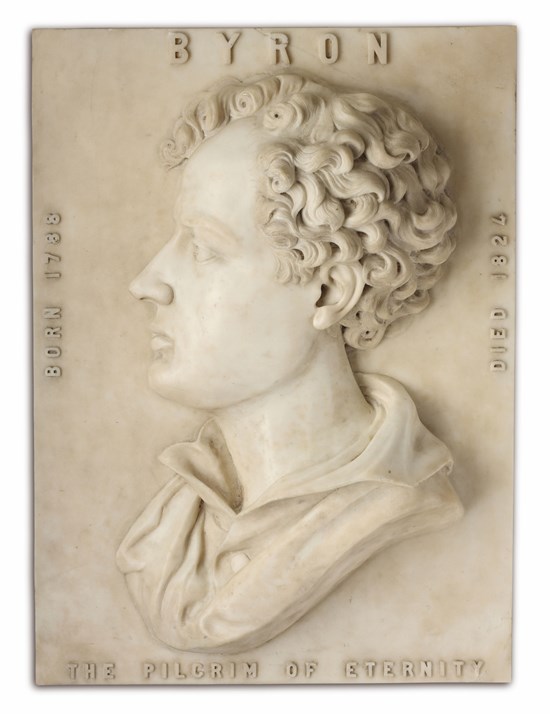